Although the sensitivity of analytical equipment has increased significantly in recent years, detecting uncharged atoms has remained a problem. This invention is a nanotube-based apparatus that uses an ionizing tip to charge neutral species (atoms, molecules, or condensates), and then routine instrumentation (e.g., channel-electron multiplier, position-sensitive microchannel plates, mass spectrometer) for further analysis. Due to a nanotube’s small radius and extended length, even modest voltages (200V) will generate very large ionization cross sections. By measuring the effects of the field strength on both the atomic capture and the ionization process, one can efficiently and sensitively detect neutral atoms. The development of using carbon nanotubes as field emitters has openned up several applications including as sensitive gas sensors; however, previously these have relied on using forests of nanotubes, which act to shield each other and limit the reliability of the method, precluding use as atom level detection or atom interferometry. 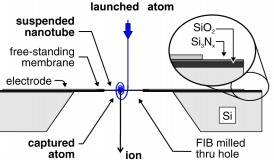