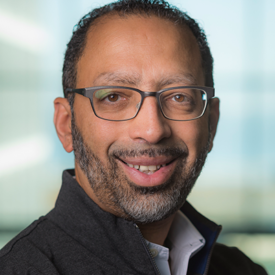 Levi Garraway, M.D., Ph.D., was appointed Chief Medical Officer and Executive Vice President, Head of Global Product Development for Roche and Genentech in October 2019. He leads employees in the Product Development organization across the globe, oversees all aspects of late stage clinical development, and co-chairs the Late Stage Portfolio Committee that invests in pivotal registrational trials. In August 2019, Levi became a member of the Genentech Board of Directors.

Prior to joining Roche, Levi served as Senior Vice President, Oncology Research and Development and Novel Target Research at Eli Lilly and Company. He also served as an investigator of the Howard Hughes Medical Institute and an Associate Professor of Medicine at the Dana-Farber Cancer Institute, Harvard Medical School and an Institute Member of the Broad Institute. Levi was the inaugural Director of the Joint Center for Cancer Precision Medicine, which spans several top research institutions including Dana-Farber Cancer Institute, Boston Children's Hospital and the Broad Institute. Levi led a research group that studied cancer genomics and drug resistance, developing a platform for systematic cancer mutation profiling that inspired multiple personalized cancer medicine efforts across the U.S. and beyond.

Levi has received numerous awards including the Paul Marks Prize for Cancer Research, the Jane Cooke Wright Award from American Association for Cancer Research, the New Innovator Award from the National Institutes of Health (NIH) and an Outstanding Investigator Award from the National Cancer Institute (NCI). He serves on the scientific advisory boards of major cancer centers, including Memorial Sloan Kettering Cancer Center and MD Anderson, and is a member of several major NIH and NCI advisory committees. In 2009, Levi was inducted into the American Society for Clinical Investigation and served as its President from 2015-16. In 2015 he was inducted into the Association for American Physicians.

Levi received his Bachelor of Arts, Doctor of Medicine and Philosophy degrees from Harvard Medical School. He completed post-doctoral training in internal medicine at the Massachusetts General Hospital and fellowship training in medical oncology at the Dana-Farber Cancer Institute.