Abstract: The present invention provides high throughput assays for identifying compounds that modulate a contractile function, as well as devices suitable for use in these assays.

Abstract: In recognition of the need to develop novel therapeutic agents, the present invention provides novel histone deacetylase inhibitors. These compounds include an ester bond making them sensitive to deactivation by esterases. Therefore, these compounds are particularly useful in the treatment of skin disorders. When the compounds reaches the bloodstream, an esterase or an enzyme with esterase activity cleaves the compound into biologically inactive fragments or fragments with greatly reduced activity Ideally these degradation products exhibit a short serum and/or systemic half-life and are eliminated rapidly. These compounds and pharmaceutical compositions thereof are particularly useful in treating cutaneous T-cell lymphoma, neurofibromatosis, psoriasis, hair loss, skin pigmentation, and dermatitis, for example. The present invention also provides methods for preparing compounds of the invention and intermediates thereto.

Abstract: The present invention relates to heterocyclic compounds (e.g., compounds described by Formula (I)) and pharmaceutically acceptable salts thereof. The invention also features pharmaceutical compositions that include these compounds and their use in therapy for treating conditions in which necroptosis is likely to play a substantial role. The heterocyclic compounds described herein can also achieve improved activity and selectivity towards RIP1 and/or RIP3.

Abstract: In an MRI scanner, the transmission and reception of RF excitation and detected signal waves is accomplished using far field excitation instead of conventional near field excitation. By superimposing two counter-propagating waves from the same source in the MRI sample interference fringes are recorded in the sample in such a way that the relative phase between the two propagation wave vectors determines the periodicity of the maxima and minima in the interference fringe pattern. The complete fringe pattern, known as a spatial hologram, contains both the phase and amplitude information of the information-bearing wave. When exposed to a replica of the original reference wave, the fringe pattern acts as a diffraction grating, reproducing the information-bearing field propagating at the same relative phase.

Abstract: Described herein are peptide analogs of glucagon-like peptide 1 (GLP-1) that retain agonist activity, but are more resistant to proteolytic degradation than native GLP-1. In the analogs, at least one α-amino acid found in the native GLP-1 is replaced with a β-amino acid residue, which may or may not be cyclically constrained. Pharmaceutical compositions containing the analogs are described, as are methods to treat diabetes, and methods to make proteolytically resistant GLP-1 analogs.

Abstract: Disclosed herein are methods of inducing neuronal outgrowth of a neuron. The methods comprise contacting the neuron with an agent that binds receptor protein tyrosine phosphatase σ (RPTPσ), to thereby induce neuronal outgrowth of the neuron. The agent may induces clustering of RPTPσ and/or inhibit binding of chondroitin sulfate proteoglycan (CSPG) to RPTPσ. Examples of suitable agents are heparan sulfate proteoglycan, heparan sulfate, heparan sulfate oligosaccharides, or heparin oligosaccharides. Additional agents are also disclosed. The neuron can be a CNS neuron or peripheral neuron. Also disclosed herein are methods of treating neuronal injury in a subject comprising, administering to the subject an agent that binds RPTPσ. Administration may be to a site of neuronal injury, to thereby induce neuronal outgrowth at the site of neuronal injury. 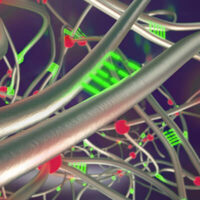