Innovations in nanoelectronic tissue scaffolds, inhibition of PD-1 for treatment of cancer and infection, production of pancreatic cells, compartmentalized screening methods, and more

Methods and compositions for the treatment of persistent infections and cancer by inhibiting the programmed cell death 1 (PD-1) pathway
U.S. Patent 10,370,446 (August 6, 2019)

Abstract: The invention describes a method for the identification of compounds which bind to a target component of a biochemical system or modulate the activity of the target, comprising the steps of: a) compartmentalizing the compounds into microcapsules together with the target, such that only a subset of the repertoire is represented in multiple copies in any one microcapsule; and b) identifying the compound which binds to or modulates the activity of the target; wherein at least one step is performed under microfluidic control. The invention enables the screening of large repertoires of molecules which can serve as leads for drug development.

Abstract: The invention provides a solution to the drawbacks associated with conventional alginate dressings. This invention features improved alginate dressings or bandages as well as a fabrication process that results in an alginate sheet that is preloaded with drug, can be stored in a freeze-dried state, and is compliant and ready to use at the time of administration.

Abstract: Provided herein are palladium-mediated coupling reactions useful in the preparation of ketone-containing organic molecules. The provided methods can be used for the preparation of natural products and pharmaceutical agents, including Eribulin, halichondrins, and analogs thereof. The present invention also provides novel halichondrin analogs which can be prepared via the palladium-mediated coupling reactions. The novel halichondrin analogs can be used in the prevention and/or treatment of diseases or conditions (e.g., proliferative diseases such as cancer).

Abstract: Methods and compositions for determining and/or monitoring the immune state of an individual are provided.

Pancreas on a chip 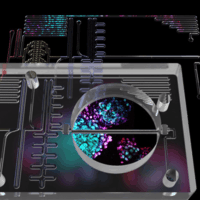