Biology’s surprising ‘message in a bottle’

In exploring the action of microvesicles, Quan Lu and colleagues at Harvard Chan School are mapping the next frontier of medical diagnostics and drug delivery 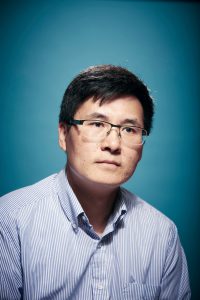 Earlier this year, Quan Lu and his colleagues published their discovery of a gene that could be a root cause of asthma. They found that a gene called gasdermin B—but not its neighboring genes, which had long been suspected of an asthma link—codes a protein that kills lung cells and may ultimately trigger asthma. For Lu, associate professor of environmental genetics and pathophysiology at the Harvard T.H. Chan School of Public Health, the finding was a breakthrough for a laboratory team that has long chased the molecular origins of asthma—a disease that afflicts nearly 27 million adults and children in the U.S. and kills more than 3,600 people a year.

But a chance follow-up by Lu’s team led to a thrilling second discovery. In rooting around for other genes that may be associated with asthma, the group came across a gene called ARRDC1 (for arrestin domain-containing 1). To their initial disappointment, Lu’s team did not find any direct role for the gene in asthma or in receptor signaling in the lung, as they had hypothesized. But they later discovered that the ARRDC1 protein has a unique capability: It can travel from inside to the surface of a cell to form tiny sacs, called microvesicles, which are subsequently released into the space around a cell. Through this singular mechanism, ARRDC1 protein can “bud” out of a cell, just like a virus.

The implications are dramatic. Microvesicles—tiny biological delivery trucks, the ubiquitous presence of which has been revealed only in the past decade—could generate new paradigms in basic biology, diagnostics, and treatment. In the not-too-distant future, their fleet may even be enlisted in novel ways to shut down tumors, track toxic exposures, or even turn off an asthma attack. 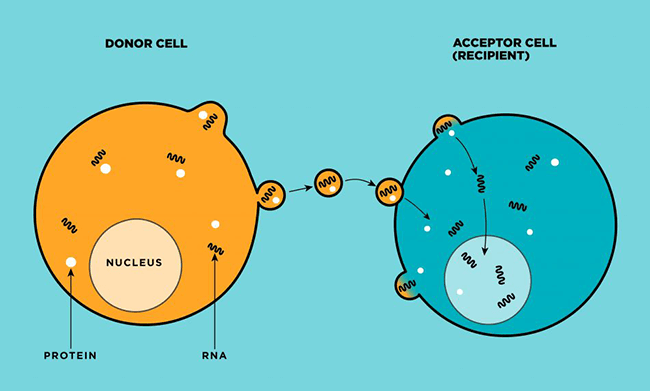 Microvesicles (shown here as small circles) are biological delivery trucks—about 100 nanometers in diameter. Human body cells push microvesicles through their cell membranes (left, in red), where the tiny structures await their assignments. Once dispatched, they migrate in blood and other body uids to target cells (right), which will absorb the microvesicles and unload their vital cargo—proteins, fats, and nucleic acids such as DNA and RNA—which are used in basic biological functions, including coagulation and immune response. (Illustration credit: Anne Hubbard.)

“This is a whole new form of intercellular communication. It’s going to change medicine,” says Philip Stahl, emeritus professor of cell biology at Washington University. “We are learning the way cells talk to each other, but we don’t know all the vocabulary yet. The heavy lifting in this field is still ahead of us.”

Microvesicles are part of a group of structures called extracellular vesicles, or EVs—the scientific study of which didn’t take off until 2006. The microvesicles that Lu’s team found are 100 nanometers in diameter—about 1/1,000th the width of a human hair and visible only at the highest magnification of electron microscopes. Yet these infinitesimal spheres may play a central and, until recently, completely unknown role in health and disease.

All cells make vesicles and push them through their cell membranes, where the structures sit, awaiting assignment. Once dispatched, they migrate in blood and other body fluids to target cells with the right molecular addresses, which will absorb them and unload their vital cargo—proteins, fats, and nucleic acids such as DNA and RNA—for basic biological functions such as coagulation and immune response. Scientists used to dismiss EVs as cellular debris—waste products of cellular activities. But they now believe these tiny floating itinerants are key mediators of cell communication.

The human body is like a cellular megacity, made up of some 37 trillion human cells and 100 trillion bacterial cells. To adapt to external stimuli, these cells have developed complex mechanisms of communication by which they can receive a message, transfer information across the plasma membrane, and launch changes within the cell in response to the message. In multicellular organisms, cells send and receive chemical messages constantly to coordinate the actions of distant organs, tissues, and cells.

As part of this process, every cell spins off 100 or more vesicles. According to Lu’s calculations, humans harbor about 5 to 10 quadrillion vesicles, each engaged in furious cell-to-cell signaling—a roar of conversations similar to that of a stock exchange floor. Today, scientists in the rapidly evolving science around vesicles are starting to listen in to these communications to fathom the secrets of both normal physiology and disease.

Most long-distance communication, or chemical signaling, between cells involves proteins or hormones that travel from one cell and bind, like a lock and key, to a new cell. The protein insulin, for example, is made in the pancreas and sent to muscle and fat cells, where the hormone helps cells absorb sugar. The ability of a cell to receive signals from other cells and then translate those signals into changes in cell behavior plays a crucial role in development and homeostasis. Conversely, the disruption of these intricately orchestrated events often causes the onset or progression of disease. Highly aggressive and advanced-stage forms of cancer, for example, generate more EVs than lower-grade forms of cancer.

Lu’s lab has been focusing on the vesicles that are generated by the budding of the ARRDC1 protein. He named these vesicles ARMMs (for ARRDC1-mediated microvesicles). He found that ARMMs contain NOTCH receptors—proteins involved in a wide range of critical physiological tasks, from embryonic development and tissue homeostasis to immunity and stem cell function. By delivering NOTCH cargoes from one cell to another cell at a distance, ARMMs set in motion a type of cell-to-cell communication based on NOTCH receptors and also carry signals from one tissue or one cell to another.

“This is a newly understood type of signaling,” Lu says. In classic hormone signaling, one protein or peptide is transferred in direct contact between cells. “But microvesicles such as ARMMs can carry many different kinds of molecules—not only proteins but also nucleic acids and lipids."

Read the entire article in Harvard Public Health Magazine, or explore the applications of this technology with OTD.

Integrated modulator is now better than ever, made by the best optical materials 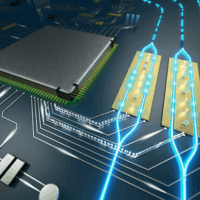