Abstract: Embodiments are directed to a method, a computer readable medium encoded with instructions that, when executed, perform a method, and a system for performing mass spectrometry analysis. Molecules of different samples may be labeled with a chemical tag, allowing a multiplexed analysis of multiple samples. The labeled molecules may be fragmented, each fragmented molecule creating at least two separate ions. The relative abundance of each of the heavier ions, which may comprise the original molecule from the sample, may be measured. A relative abundance of the labeled molecules in each of the samples may be determined from the measured relative abundances of the heavier ions.

Abstract: The rolled photonic fibers presents two codependent, technologically exploitable features for light and color manipulation: regularity on the nanoscale that is superposed with microscale cylindrical symmetry, resulting in wavelength selective scattering of light in a wide range of directions. The bio-inspired photonic fibers combine the spectral filtering capabilities and color brilliance of a planar Bragg stack compounded with a large angular scattering range introduced by the microscale curvature, which also decreases the strong directional chromaticity variation usually associated with flat multilayer reflectors. Transparent and elastic synthetic materials equip the multilayer interference fibers with high reflectance that is dynamically tuned by longitudinal mechanical strain. A two-fold elongation of the elastic fibers results in a shift of reflection peak center wavelength of over 200 nm.

Abstract: Methods and compositions are provided for treating weight related conditions and metabolic disorders by altering microbiota in a subject. One aspect provides methods and compositions to alter microbiota in a subject by administering to the subject a composition that includes a substantially purified microbiota from phyla such as Bacteroidetes, Proteobacteria, Firmicutes and Verrucomicrobia or orders such as Bacteroidales, Verrucomicrobiales, Clostridiales and Enterobacteriales or genera such as Alistipes, Clostridium, Escherichia, and Akkermansia. Another aspect includes a pharmaceutical composition for altering microbiota that includes a therapeutically effective amount of substantially purified microbiota and a pharmaceutically acceptable carrier. Yet another aspect includes methods for treating a disorder, such as obesity, in a subject in need of such treatment by changing relative abundance of microbiota in a gastrointestinal tract of the subject without or in addition to a surgical procedure.

David A. Weitz and Esther Amstad

Abstract: The present invention generally relates to the production of fluidic droplets. Certain aspects of the invention are generally directed to systems and methods for creating droplets by flowing a fluid from a first channel to a second channel through a plurality of side channels. The fluid exiting the side channels into the second channel may form a plurality of droplets, and in some embodiments, at very high droplet production rates. In addition, in some aspects, double or higher-order multiple emulsions may also be formed. In some embodiments, this may be achieved by forming multiple emulsions through a direct, synchronized production method and/or through the formation of a single emulsion that is collected and re-injected into a second microfluidic device to form double emulsions.

Halofuginol derivatives and their use in cosmetic and pharmaceutical compositions
U.S. Patent 10,155,742 (December 18, 2018)

Abstract: The invention provides a method for lysing a single cell embedded in a tissue from the inside of the cell, and collecting the intracellular lysate for use in analytical methods. This method preserves the state of molecules of the cell, and therefore allows for transformation of a single target cell in live tissue into a format that can be evaluated using analytical methods.

Abstract: This invention is in the area of improved anti-aP2 antibodies and antigen binding agents, and compositions thereof, which target the lipid chaperone aP2/FABP4 (referred to as "aP2") for use in treating disorders such as diabetes, obesity, cardiovascular disease, fatty liver disease, and/or cancer, among others. In one aspect, improved treatments for aP2 mediated disorders are disclosed in which serum aP2 is targeted and the biological activity of aP2 is neutralized or modulated using low-binding affinity aP2 monoclonal antibodies, providing lower fasting blood glucose levels, improved systemic glucose metabolism, increased systemic insulin sensitivity, reduced fat mass, reduced liver steatosis, reduced cardiovascular disease and/or a reduced risk of developing cardiovascular disease.

Structure of innovative valve enables oscillation, could be used in soft logic circuits 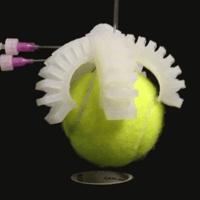