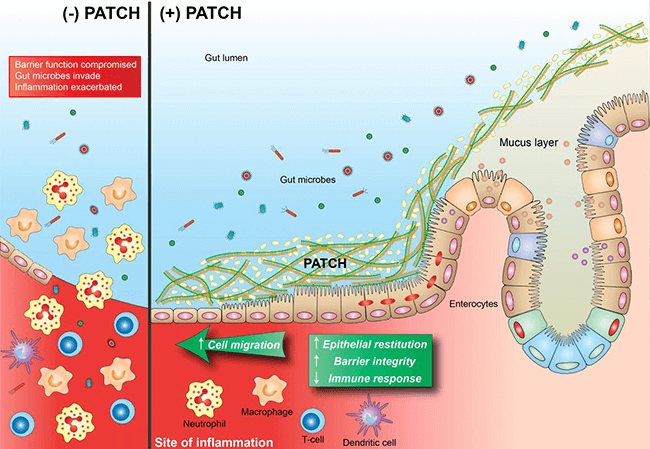 Left: Inflammatory lesions destroy epithelial cells that function as a barrier between the inside of the gut (lumen) and the rest of the body. This loss of barrier function leads to a feedback cycle of worsening inflammation fueled by bacteria and other particles crossing the barrier. Right: PATCH is a bioactive material, synthesized by engineered probiotic bacteria, that helps to maintain gut barrier function even in the presence of inflammatory insults, thereby helping to keep bacteria and other particulates in the lumen and ameliorating the symptoms of inflammation. (Image credit: Wyss Institute at Harvard University.)

About 1.6 million people in the US alone currently have lifelong and incurable Inflammatory Bowel Disease (IBD) including Crohn's disease and ulcerative colitis, and 70,000 new cases are diagnosed in the USA each year. IBD patients suffer from pain, extreme discomfort, and many other symptoms caused by continuously relapsing and remitting inflammatory lesions in the layer of cells that lines the intestinal lumen (mucosa). The exact causes for IBD still are poorly understood, but it is clear that a misdirected immune system is at work, and that certain components of the microbial community in our gut, known as the intestinal microbiome, and environmental factors contribute to its destructive forces.

While anti-inflammatory drugs can dampen acute inflammation and antibiotics can fight local infections when IBD episodes flare up, their use also comes at a cost. Anti-inflammatory drugs can have severe side effects and antibiotics can disrupt the beneficial parts of the microbiome on which we depend for many of our body's functions. Importantly, there are no wound treatments available that could be applied to inflamed lesions directly from inside the gut lumen in order to speed up the healing process and minimize the use of those drugs.

Now, a research team at Harvard's Wyss Institute for Biologically Inspired Engineering led by Neel Joshi, Ph.D., and funded in part by Harvard's Blavatnik Biomedical Accelerator, has developed a living material approach that uses a strain of genetically engineered E.coli Nissle gut bacteria as a locally acting probiotic. The engineered bacteria produce a network of nanofibers that directly binds to mucus to fill inflamed areas like a patch, shielding them from gut microbes and environmental factors. This probiotic-based therapeutic strategy protected mice against the effects of colitis induced by a chemical agent and promoted mucosal healing. Their findings are reported in Nature Communications.

"With this 'living therapeutics' approach, we created multivalent biomaterials that are secreted by resident engineered bacteria on-site and attach to many mucus proteins at a time - firmly adhering to the viscous and otherwise moving mucus layer, which is a challenging thing to do," said Joshi. "The 'Probiotic Associated Therapeutic Curli Hybrids' (PATCH) approach, as we named it, creates a biocompatible, mucoadhesive coating that functions as a stable, self-regenerating BAND-AID® and provides biological cues for mucosal healing." Joshi presently is a Core Faculty member of the Wyss Institute and Associate Professor at Harvard's Paulson School of Engineering and Applied Sciences (SEAS), and will shortly be appointed as a Professor at Northeastern University in Boston.

In previous work, Joshi's group has demonstrated that self-regenerating bacterial hydrogels firmly attached to mucosal surfaces ex vivo, and, when orally given to mice, withstood the harsh pH and digestive conditions of the stomach and small intestine without affecting the health of the animals. To fabricate them, his team programmed a laboratory E. coli strain to synthesize and secrete a modified CsgA protein, which as part of E. coli's "curli" system assembles into long nanofibers at the outer surface of the bacteria. "To enable mucus adhesion, we fused CsgA to the mucus-binding domain of different human trefoil factors (TFFs), proteins that occur naturally in the intestinal mucosa and bind to mucins, the major mucus proteins present there. The secreted fusion proteins form a water-storing mesh with tunable hydrogel properties," said co-author Anna Duraj-Thatte, Ph.D., a postdoctoral fellow working with Joshi. "This turned out to be a simple and robust strategy to produce self-renewing, mucoadhesive materials with long residence times in the mouse intestinal tract."

In their new study, the team further built on these findings by introducing the machinery for producing one of the mucoadhesive hydrogels based on TFF3 into an E. coli Nissle strain that is a normal gut bacterium which can thrive in the colon and cecum sections of the intestinal tract affected by IBD, and is currently sold in many commercial probiotic formulations. "We found that the newly engineered Nissle bacteria, when given orally, also populated and resided in the intestinal tract, and that their curli fibers integrated with the intestinal mucus layer," said first-author Pichet Praveschotinunt, who is a graduate student mentored by Joshi.

"When we induced colitis in the colons of mice by orally administering the chemical dextran sodium sulfate, animals that had received the PATCH-generating E. coli Nissle strain by daily rectal administration starting three days prior to chemical treatment, had significantly faster healing and lower inflammatory responses, which caused them to lose much less weight and recover faster compared to control animals," said Praveschotinunt. "Their colon epithelial mucosa displayed a more normal morphology and lower numbers of infiltrating immune cells".

Joshi and his team think that their approach could be developed as a companion therapy to existing anti-inflammatory, immuno-suppressant, and antibiotic therapies to help minimize patients' exposure to the drugs and potentially provide protection against IBD relapses.

"This powerful and simple approach could potentially impact the lives of thousands of patients with IBD for whom there is no disease-specific cure available. It also is a testament to the creativity and vision of the Wyss Institute's "Living Cellular Devices" initiative that engineers living cells to perform key therapeutic and diagnostic tasks in our bodies," said Wyss Institute Founding Director Donald Ingber, M.D., Ph.D., who is also the Judah Folkman Professor of Vascular Biology at HMS, the Vascular Biology Program at Boston Children's Hospital, and Professor of Bioengineering at SEAS.

Additional authors on the study are Wyss Institute researchers Ilia Gelfat, Franziska Bahl, and David B. Chou, M.D., Ph.D. The study was supported by a grant from the National Institutes of Health, funds by Harvard's Wyss Institute for Biologically Inspired Engineering and the Blavatnik Biomedical Accelerator, and a royal Thai government scholarship. 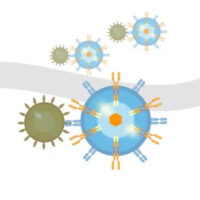