Abstract: The invention relates to vaccine compositions having a carrier protein and an antigen of interest entrapped in a complex, methods of making such vaccines, and methods of vaccine administration.

Abstract: The present invention comprises compositions, methods, and devices for delivering angiogenic factors and signaling molecules to a target tissue, and controlling the release of these factors and signaling molecules to spatially and temporally restrict their release and dissemination, for the purpose of promoting angiogenesis in target tissues wherein increased blood supply is needed.

Abstract: The present invention is drawn to compounds of Formula (I) below:

and the pharmaceutically acceptable salts thereof, wherein R and R'' are defined herein. The compounds are useful inhibitors of histone deacetylases (HDAC).

Abstract: The invention provides methods of screening a compound that can increase spine/excitatory synapse formation and/or numbers. The compound is identified by contacting Ephexin5 with a test compound and selecting the compounds that inhibit Rho GEF activity of Ephexin5. Additionally, the invention also provides methods for increasing spine/excitatory synapse formation and/or numbers by contacting a neuron with an Ephexin5 inhibitor.

Abstract: The invention provides novel and versatile classes of riboregulators, including inter alia activating and repressing riboregulators, switches, and trigger and sink RNA, and methods of their use for detecting RNAs in a sample such as a well and in modulating protein synthesis and expression.

Abstract: The ability to levitate, to separate, and to detect changes in density using diamagnetic particles suspended in solutions containing paramagnetic cations using an inhomogeneous magnetic field is described. The major advantages of this separation device are that: i) it is a simple apparatus that does not require electric power (a set of permanent magnets and gravity are sufficient for the diamagnetic separation and collection system to work); ii) it is compatible with simple optical detection (provided that transparent materials are used to fabricate the containers/channels where separation occurs; iii) it is simple to collect the separated particles for further processing; iv) it does not require magnetic labeling of the particles/materials; and v) it is small, portable. The method and kits provided provide for separation and collection of materials of different densities, diagnostics for detection of analytes of interest, monitoring of solid-supported chemical reactions and determination of densities of solid and liquid mixtures. 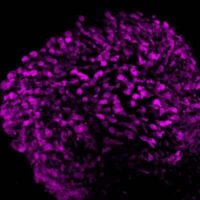