Abstract: Biomaterial systems, e.g., gel scaffolds, are used in vivo to recruit immune cells and promote their activation towards a non-inflammatory phenotype, thereby leading suppression of inflammation. The compositions and methods are useful to reduce the severity of autoimmunity, chronic inflammation, allergy, and periodontal disease.

Abstract: Techniques for obtaining a frequency standard using the crystal field splitting frequency of nitrogen vacancy center in diamond are disclosed. In certain exemplary embodiments, a microwave field is applied to the diamond and optically exciting the diamond under green light. The photoluminescent response of the diamond is measured by a photodetector. The intensity of the photoluminescent response can be used to determine the phase shift between the microwave and the crystal field splitting frequency. The microwave field frequency can be adjusted until the phase shift is below a predetermined threshold, and the microwave frequency can then be output for use as a standard.

Abstract: Some aspects of this disclosure provide compositions, methods, and kits for improving the specificity of RNA-programmable endonucleases, such as Cas9. Also provided are variants of Cas9, e.g., Cas9 dimers and fusion proteins, engineered to have improved specificity for cleaving nucleic acid targets. Also provided are compositions, methods, and kits for site-specific recombination, using Cas9 fusion proteins (e.g., nuclease-inactivated Cas9 fused to a recombinase catalytic domain). Such Cas9 variants are useful in clinical and research settings involving site-specific modification of DNA, for example, genomic modifications.

Abstract: An interconnect structure for integrated circuits for copper wires in integrated circuits and methods for making the same are provided. Mn, Cr, or V containing layer forms a barrier against copper diffusing out of the wires, thereby protecting the insulator from premature breakdown, and protecting transistors from degradation by copper. The Mn, Cr, or V containing layer also promotes strong adhesion between copper and insulators, thus preserving the mechanical integrity of the devices during manufacture and use, as well as protecting against failure by electromigration of the copper during use of the devices and protecting the copper from corrosion by oxygen or water from its surroundings. In forming such integrated circuits, certain embodiments of the invention provide methods to selectively deposit Mn, Cr, V, or Co on the copper surfaces while reducing or even preventing deposition of Mn, Cr, V, or Co on insulator surfaces. Catalytic deposition of copper using a Mn, Cr, or V containing precursor and an iodine or bromine containing precursor is also provided.

Abstract: The invention provides systems, methods, reagents, apparatuses, vectors, and host cells for the continuous evolution of nucleic acids. For example, a lagoon is provided in which a population of viral vectors comprising a gene of interest replicates in a stream of host cells, wherein the viral vectors lack a gene encoding a protein required for the generation of infectious viral particles, and wherein that gene is expressed in the host cells under the control of a conditional promoter, the activity of which depends on a function of the gene of interest to be evolved. Some aspects of this invention provide evolved products obtained from continuous evolution procedures described herein. Kits containing materials for continuous evolution are also provided.

A battery inspired by vitamins 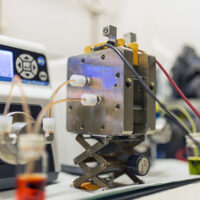