Abstract: Compositions are provided comprising a replication-competent herpesvirus vector system and/or a herpesvirus vector particle comprising a heterologous recombinant transgene of interest encoding an antigen of interest (e.g., a tumor-associated antigen, a microbial antigen, etc.), wherein the recombinant transgene has been modified to comprise a codon usage signature of a herpesvirus late gene operably linked to an active promoter. Such compositions find use in a variety of methods including, for example, methods of generating an immune response against an antigen of interest in a subject in need thereof, as well as methods for treating or preventing cancer or a microbial infection.

Abstract: The invention provides a solution to the drawbacks associated with conventional alginate dressings. This invention features improved alginate dressings or bandages as well as a fabrication process that results in an alginate sheet that is preloaded with drug, can be stored in a freeze-dried state, and is compliant and ready to use at the time of administration.

Abstract: Provided herein are, inter alia, barcode probes comprised of transiently or stably fluorescently labeled nucleic acid nanostructures that are fully addressable and able to be read using standard fluorescent microscope and methods of use thereof including methods of use as detectable labels for probes.

Abstract: Disclosed herein are methods, compositions, kits, and agents useful for inducing β cell maturation, and isolated populations of SC-β cells for use in various applications, such as cell therapy.

Abstract: Provided herein are primers and primer systems having improved specificity and kinetics over existing primers, and methods of use thereof. 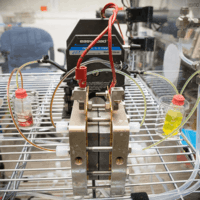