Next generation of robots crawl, run, fly into the real world

Harvard scientists help drive new age of machines, aiming for transformative impact in medicine, on Main Street, and beyond

This is the first in a series of features titled "Edge of Discovery" in the Harvard Gazette.

“We build the kinds of robots that people haven’t imagined yet,” said Radhika Nagpal, the Fred Kavli Professor of Computer Science. “Our strength in some ways is the wild and crazy robots. Robots that are more like animals than they are wheeled cars.”

On a visit to one Harvard robotics lab, the sewing machines stand out, while the head of another explains how and why lab members are studying termites in Namibia.

Welcome to the new age of machines, in which scientists with seemingly disparate talents are using cutting-edge materials, cheap sensors, 3-D printing, and powerful computers to accelerate advances in robotics.

Prior innovations transformed the factory and warehouse, but those robots work best in controlled environments, usually out of public view. For researchers at Harvard and elsewhere, the new target is Main Street. “We were promised these things by sci-fi for 50 years,” said Robert Wood, Charles River Professor of Engineering and Applied Sciences. “So where are the robots?”

The next generation will venture widely into the real world, trekking through forests and fields, driving around town, and covering chores. Major retailers such as Amazon are frank about their desire to deliver packages with drones, automakers want your car to steer itself, and for those who can’t find the time to vacuum the living room rug, there’s a robot for that.

But tomorrow’s machines won’t just drop you off, deliver your packages, and clean your house. They will also search for disaster victims and help farm food, experts say. They’ll fight wars, brace limbs, and heal hearts....

Read the full story in the Harvard Gazette

Single metalens focuses all colors of the rainbow in one point 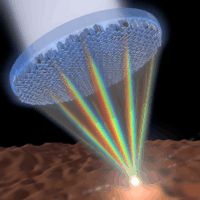