Innovations in enrichment of cells, fluorination of organic compounds, fabrication of nanopores, differentiation of stem cells, soft robotics, and more

Abstract: The present invention is directed to reduced and highly oxidized polysaccharides, such as alginates, that are useful for encapsulating therapeutic or diagnostic agents, or lipid based nanoparticles, e.g., liposomes or virosomes, encapsulating therapeutic or diagnostic agents, prior to their delivery into a subject, as well as methods for making and using them.

Abstract: This disclosure features artificial tympanic membrane graft devices and two-component bilayer graft devices that include a scaffold having a plurality of ribs made of a first material and a plurality of spaces between the ribs filled or made with the first material, a different, second material, a combination of the first and a second materials, or a combination of a second material and one or more other different materials. The bilayer graft devices have two components or layers. One component, e.g., the underlay graft device, can include a projection, and the second component, e.g., the overlay graft device, can include an opening that corresponds to the projection (or vice versa) so that the opening and the projection can secure the two layers together in a "lock and key" manner. This disclosure also features methods of making, using, and implanting the three-dimensional artificial tympanic membrane and bilayer graft devices. 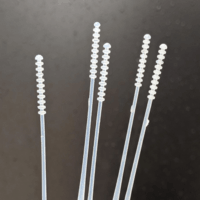