May 13, 2016 – Holograms are a ubiquitous part of our lives. They are in our wallets — protecting credit cards, cash and driver’s licenses from fraud — in grocery store scanners and biomedical devices.

Even though holographic technology has been around for decades, researchers still struggle to make compact holograms more efficient, complex and secure.

Now, researchers at the Harvard John A. Paulson School of Engineering and Applied Sciences have programmed polarization into compact holograms. These holograms use nanostructures that are sensitive to polarization (the direction in which light vibrates) to produce different images depending on the polarization of incident light. This advance, which works across the spectrum of light, improves anti-fraud holograms as well as those used in entertainment displays.

The research is described in Science Advances.

“The novelty in this research is that by using nanotechnology, we’ve made holograms that are highly efficient, meaning that very little light is lost to create the image,” said Federico Capasso, the Robert L. Wallace Professor of Applied Physics and Vinton Hayes Senior Research Fellow in Electrical Engineering and senior author of the paper. “By using incident polarized light, you can see far a crisper image and can store and retrieve more images. Polarization adds another dimension to holograms that can be used to protect against counterfeiting and in applications like displays.”

Harvard’s Office of Technology Development has filed patents on this and related technologies and is actively pursuing commercialization opportunities.

Holograms, like digital photographs, capture a field of light around an object and encode it on a chip. However, photographs only record the intensity of light while holograms also capture the phase of light, which is why holograms appear three-dimensional.

“Our holograms work like any other, but the image produced depends on the polarization state of the illuminating light, providing an extra degree of freedom in design for versatile applications,” said Mohammadreza Khorasaninejad, postdoctoral fellow in the Capasso Lab and first author of the paper. 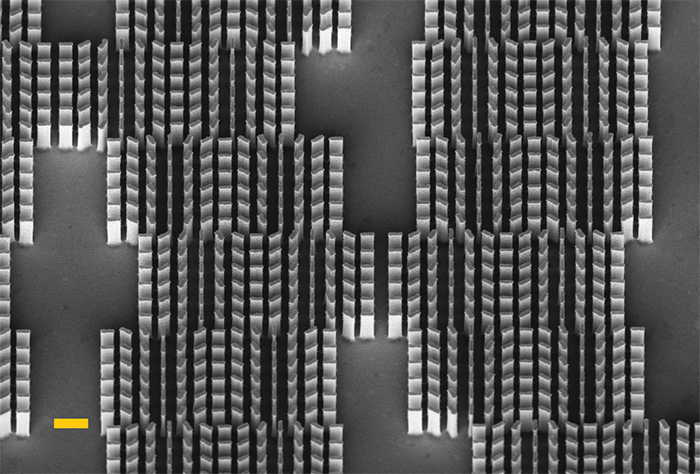 The team built nanostructured patterns from silicon on a glass substrate, which act as superpixels. Each superpixel responds to a certain polarization state of the incident light. Even more information can be encoded in the hologram by designing and arranging the nanofins to respond differently to the chirality of the polarized incident light.

“Being able to encode chirality can have important applications in information security such as anti-counterfeiting,” said Antonio Ambrosio, a research scientist in the Capasso Lab and co-first author. “For example, chiral holograms can be made to display a sequence of certain images only when illuminated with light of specific polarization not known to the forger.”

“By using different nanofin designs in the future, one could store and retrieve far more images by employing light with many states of polarization,” said Capasso.

Holograms projected on a white screen while changing the wavelength of light from blue to red. (Image courtesy of the Capasso Lab.)

Because this system is compact, it could have application in portable projectors, 3D movies and wearable optics.

“We have also incorporated in some of the holograms a lens function that has allowed us to produce images at large angles,” said Khorasaninejad. “This functionality, combined with the small footprint and lightweight, has significant potential for wearable optics applications.”

This work was supported in part by the Air Force Office of Scientific Research, Google Inc., and Thorlabs Inc.

Studies show insoles that apply low-level vibration improve nerve function, with potential benefits in wellness and performance for many different types of wearers 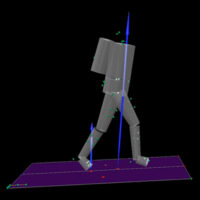