These fluorescence images show a matrix representing 124 distinct metafluorophores, that are generated by combining three fluorescent dyes with varying intensity levels. In the future, the metafluorophore’s unique and identifiable color patterns can be used to analyze the molecular components of complex samples. (Image credit: Peng Yin Laboratory.)

Biomedical researchers are understanding the functions of molecules within the body’s cells in ever greater detail by increasing the resolution of their microscopes. However, what’s lagging behind is their ability to simultaneously visualize the many different molecules that mediate complex molecular processes in a single snap-shot.

Now, a team from Harvard’s Wyss Institute for Biologically Inspired Engineering, the LMU Munich, and the Max Planck Institute of Biochemistry in Germany, has engineered highly versatile metafluorophores by integrating commonly used small fluorescent probes into self-folding DNA structures where their colors and brightness can be digitally programmed. This nanotechnological approach offers a palette of 124 virtual colors for microscopic imaging or other analytical methods that can be adapted in the future to visualize multiple molecular players at the same time with ultra-high definition. The method is reported in Science Advances.

With their new method, the researchers address the problem that thus far only a limited number of molecular species can be visualized simultaneously with fluorescence microscopy in a biological or clinical sample. By introducing fluorescent DNA nanostructures called metafluorophores — versatile fluorescent dyes whose colors are determined by how their individual components are arranged in 3-dimensional structures — they overcome this bottleneck.

“We use DNA nanostructures as molecular pegboards: by functionalizing specific component strands at defined positions of the DNA nanostructure with one of three different fluorescent dyes, we achieve a broad spectrum of up to 124 fluorescent signals with unique color compositions and intensities,” said Peng Yin, who is a Core Faculty member at the Wyss Institute and Professor of Systems Biology at Harvard Medical School. “Our study provides a framework that allows researchers to construct a large collection of metafluorophores with digitally programmable optical properties that they can use to visualize multiple targets in the samples they are interested in.”

The DNA nanostructure-based approach can be used like a barcoding system to visually profile the presence of many specific DNA or RNA sequences in samples in what is called multiplexing.

To enable the visualization of multiple molecular structures in tissue samples whose thickness can limit the movement of larger DNA nanostructures and make it difficult for them to find their targets, and to reduce the possibility that they attach themselves to non-specific targets producing false fluorescence signals, the team took additional engineering steps.

“We developed a triggered version of our metafluorophore that dynamically self-assembles from small component strands that take on their prescribed shape only when they bind their target,” said Ralf Jungmann, Ph.D., who is faculty at the LMU Munich and the Max Planck Institute of Biochemistry and co-conducted the study together with Yin. “These in-situ assembled metafluorophores can not only be introduced into complex samples with similar combinatorial possibilities as the prefabricated ones to visualize DNA, but they could also be leveraged to label antibodies as widely used detection reagents for proteins and other biomolecules.”

“This new type of programmable, microscopy-enhancing DNA nanotechnology reveals how work in the Wyss Institute’s Molecular Robotics Initiative can invent new ways to solve long-standing problems in biology and medicine. These metafluorophores that can be programmed to self-assemble when they bind their target, and that have defined fluorescent barcode readouts, represent a new form of nanoscale devices that could help to reveal complex, multi-component, biological interactions that we know exist but have no way of studying today,” said Wyss Founding Director Donald Ingber, M.D., Ph.D., who is also the Judah Folkman Professor of Vascular Biology at Harvard Medical School and the Vascular Biology Program at Boston Children’s Hospital, and Professor of Bioengineering at the Harvard John A. Paulson School of Engineering and Applied Sciences.

Besides Yin and Jungmann, additional authors on the publication were Johannes Woehrstein and Maximilian Strauss, both members of Jungmann’s research group, and former members of the Yin group at the Wyss Institute, Luvena Ong, Ph.D., Bryan Wei, Ph.D. and David Zhang, Ph.D.

From drinking straws to robots 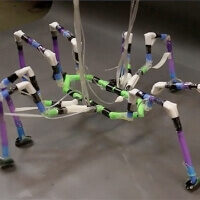