Today the Wyss Institute for Biologically Inspired Engineering at Harvard University unveiled the launch of its startup company Opsonix Inc. The announcement follows a worldwide exclusive licensing agreement between Harvard’s Office of Technology Development (OTD) and Opsonix Inc. enabling the company to ready the Wyss-designed sepsis therapy for clinical use.

Pathogen-induced sepsis strikes at least a million people every year in the U.S. — more than prostate cancer, breast cancer and AIDS combined — and over 30 percent of these cases are fatal. There is no therapy specifically approved to treat sepsis and the present standard of care is limited to providing patients with intravenous fluids and broad-spectrum antibiotics, which often does not suffice to halt disease progression. Existing therapies also cannot combat the growing emergence of antibiotic-resistant bacteria; thus sepsis represents a huge unmet clinical need.

“We are developing an entirely new approach to treat sepsis that directly and quickly eliminates the pathogens and toxins that trigger the sepsis cascade. Even more importantly, we can accomplish this without having to first identify the infectious agent,” said Wyss Institute Founding Director Don Ingber, M.D., Ph.D., who is also the Judah Folkman Professor of Vascular Biology at Harvard Medical School and Boston Children's Hospital and Professor of Bioengineering at the Harvard John A. Paulson School of Engineering and Applied Sciences. 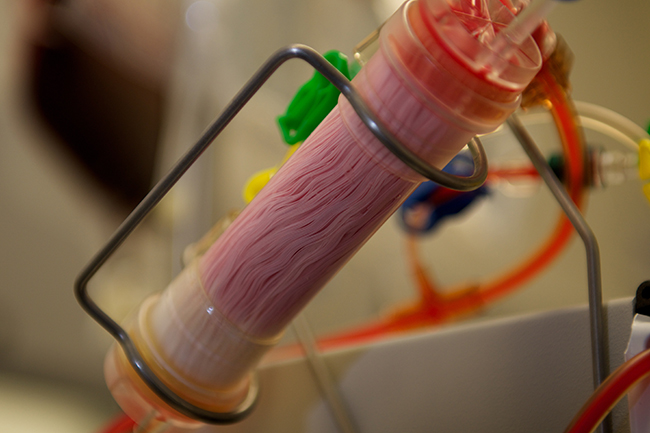 The pathogen-binding FcMBL protein is tethered to the interior surface of hollow fibers within a cartridge. This cartridge can be plugged into a dialysis-like extracorporeal circuit through which the blood from patients with sepsis could be run and cleansed. (Image credit: Wyss Institute at Harvard University.)

Key to the technology is a genetically engineered protein that is based on a naturally occurring human opsonin protein called Mannose Binding Lectin (MBL). With its ability to bind to a broad spectrum of infectious invaders and endotoxins released by them into the blood stream, MBL usually funnels circulating blood pathogens to the immune system’s innate clearance apparatus.

However, to be able to leverage MBL as a blood-cleansing tool, the Wyss team led by Ingber and Michael Super, a Wyss Senior Staff Scientist, fused the pathogen-binding portion of MBL to the Fc region of human immunoglobulin to yield the engineered FcMBL protein.

During the technology’s incubation period, for which the Wyss Institute was funded with more than $22 million by the Defense Advanced Research Projects Agency (DARPA) under their Dialysis-Like Therapeutic program, the researchers cleared several obstacles along the preclinical development path.

Putting it to the test in a proof-of-principle study published in Nature Medicine, the team attached FcMBL to nanoscale magnetic beads and demonstrated their ability to effectively clear a wide variety of pathogens and endotoxin from human blood samples when exposed to a magnetic field in a device mimicking the spleen or Biospleen. Moreover, when applied to an extra-corporeal blood circuit attached to septic rats, the Biospleen rapidly cleansed the animals’ blood, significantly suppressed their sepsis inflammatory cascades, and prolonged their survival.

“To further de-risk and improve the technology, we had to simplify the device by eliminating the possibility of magnetic beads being carried back into the patients’ circulation, and show that the pathogen-extracting method is compatible with current antibiotic therapies,” said Super. These challenges now have been successfully addressed in a newly designed device format that was recently published in Biomaterials.

To simplify the therapy for eventual clinical use, the Wyss team attached the pathogen-capturing FcMBL protein to the inner surface of hollow fibers similar to those contained in cartridges already approved by the FDA for dialysis therapy. When tested in rats infected with pathogens or endotoxin, the FcMBL-coated cartridges synergized with commonly used broad-spectrum antibiotics, reducing the infectious pathogen and toxin loads and stabilizing vital signs in the animals more effectively than antibiotics alone. Using FcMBL in cartridges had other important benefits, too: it sped up the pathogen extraction process and considerably reduced the amount of FcMBL protein needed for each individual treatment.

Opsonix has launched with Series A financing led by Baxter Ventures and its founding team includes CEO Eric Devroe, Ph.D., and Scientific Founders Ingber and Super. The company will use the proceeds of the Series A financing to advance the development of the therapy toward clinical investigation.