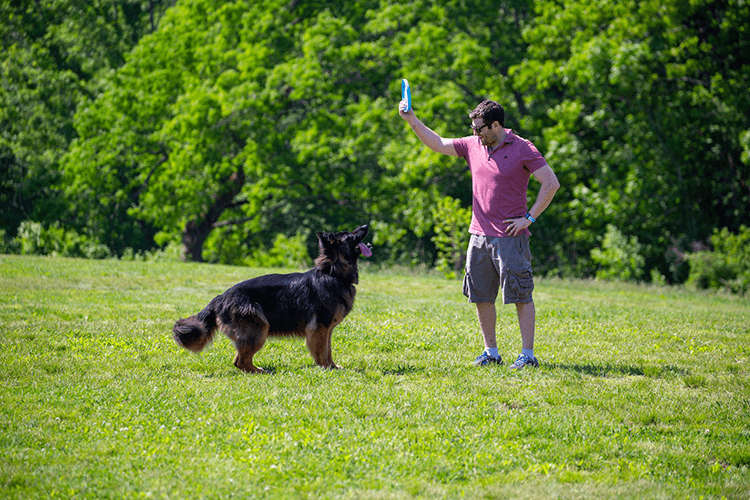 Harvard Office of Technology Development and the Wyss Institute for Biologically Inspired Engineering at Harvard University announced today that Rejuvenate Bio has been granted an exclusive worldwide license to commercialize a gene therapy technology developed at the Wyss Institute and Harvard Medical School (HMS) to prevent and treat several age-related diseases in dogs, extending their overall healthspan. The announcement follows the publication in PNAS of a study led by Harvard researchers detailing the technology’s efficacy in mitigating obesity, type II diabetes, heart failure, and renal failure in mice.

“We are very excited to translate our winning gene therapy work from mice to dogs, where there is a dearth of treatment options to combat age-related diseases,” said Daniel Oliver, CEO and co-founder of Rejuvenate Bio, who was formerly an Entrepreneur-in-Residence (EIR) at the Wyss Institute and a Blavatnik Fellow at Harvard Business School, and is a co-author of the PNAS publication.

Rejuvenate Bio has secured funding from the Department of Defense’s Small Business Innovation Research program, as well as seed funding from investors and a grant from the American Cavalier King Charles Spaniel Club. With this support, the company has launched a pilot study testing its technology’s efficacy in halting mitral valve disease, which strikes the majority of Cavalier King Charles Spaniels by age eight and causes heart failure. Following demonstration of efficacy, they hope to expand their treatment to all dog breeds, as more than 7 million dogs in the US suffer from mitral valve disease.

“We are very passionate about and focused on dogs’ health, because so many dog owners around the world have to helplessly watch their beloved pets’ quality of life deteriorate as they age,” said co-author Noah Davidsohn, Ph.D., who is a co-founder and Chief Technology Officer of Rejuvenate Bio and a former Research Scientist at the Wyss Institute and HMS. “We want to get rid of the morbidities associated with aging, so dogs can be as happy and healthy as possible throughout their lives.”

Science hasn’t yet found a way to make complex animals like dogs live forever, so the next best thing we can do is find a way to maintain health for as long as possible during the aging process. — Prof. George Church

Rejuvenate Bio’s technology originated in the lab of co-founder George Church, Ph.D., as part of Davidsohn’s postdoctoral research into the genetics of aging. Church is the Robert Winthrop Professor of Genetics in the Blavatnik Institute at HMS and a Core Faculty member of the Wyss Institute. Davidsohn, Church, and their co-authors hypothesized that providing three longevity-associated genes (FGF21, sTGFβR2, and αKlotho) to mice via a combination gene therapy would combat age-related diseases and confer health benefits. Those three genes have previously been shown to impart increased health and lifespan benefits in mice that were genetically engineered to overexpress them, and the team’s goal was to produce the same outcome in non-engineered animals. They created separate gene therapy delivery vehicles for each gene using a serotype of adeno-associated virus (AAV8), and then injected the AAV constructs into mouse models of obesity, type II diabetes, heart failure, and renal failure to see if there was a beneficial effect.

FGF21 alone caused complete reversal of weight gain and type II diabetes in obese, diabetic mice following a single gene therapy administration, and its combination with sTGFβR2 also reduced kidney atrophy by 75% in mice with renal fibrosis. The gene sTGFβR2 alone and in combination with either of the other two gene therapies improved the heart function of mice with heart failure, showing that co-administration of FGF21 and sTGFβR2 could successfully treat all four age-related conditions, thereby improving health and survival.

Importantly, the injected genes remain separate from the animals’ genomes, do not modify their natural DNA, and cannot be passed to future generations or between living animals.

“Since the treatment works to suppress fibrotic processes, we believe it could also be applied to other heart diseases such as dilated cardiomyopathy, which eventually leads to congestive heart failure and/or sudden death in affected dogs,” said Davidsohn. “We are hopeful that our pilot study will allow us to move toward an animal drug trial with the FDA, which generally takes about three years to complete.”

The first gene therapies for humans have been approved by the FDA in recent years, including Spark Therapeutics’ Luxturna® for inherited retinal disease and Novartis’ Zolgensma® for pediatric spinal muscular atrophy, but these treatments target relatively rare diseases. If Rejuvenate’s therapy proves to be both safe and effective in dogs, it could pave the way for similar treatments for common, age-related illnesses in humans.

“Science hasn’t yet found a way to make complex animals like dogs live forever, so the next best thing we can do is find a way to maintain health for as long as possible during the aging process,” said Church.

“The Wyss Institute is extremely proud of the Rejuvenate team for reaching this milestone on the path to commercialization of a truly novel technology, and we are excited to follow the rest of their journey from the lab to the clinic,” said Donald Ingber, M.D., Ph.D., who is the Wyss Institute’s Founding Director as well as the Judah Folkman Professor of Vascular Biology at HMS and Boston Children’s Hospital, and Professor of Bioengineering at the Harvard John A. Paulson School of Engineering and Applied Sciences (SEAS).