Heading off the post-antibiotic age 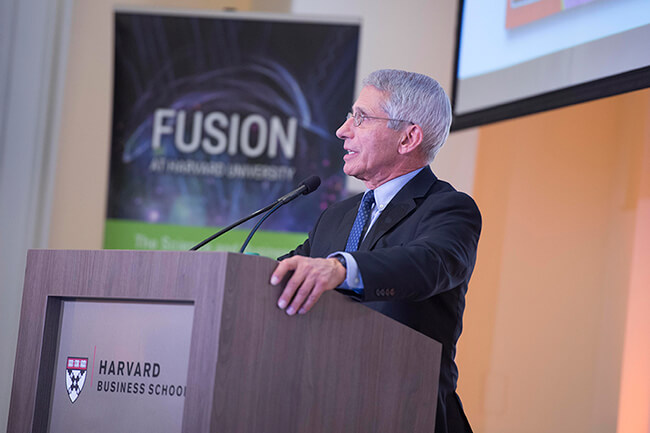 Anthony S. Fauci, director of the National Institute of Allergy and Infectious Diseases, delivered the keynote address at "FUSION: The Science and Business of Combating Antibiotic Resistance" at Harvard on October 17, 2017. (Photo credit: Tony Rinaldo Photography.)

Worldwide deaths from antibiotic-resistant bugs could rise more than tenfold by 2050 if steps aren’t taken to head off their spread, according to Anthony Fauci, the director of the National Institute of Allergy and Infectious Diseases.

Fauci, who has warned of the danger of a “post-antibiotic age,” traced the spread of antibiotic resistance to rampant overprescribing, to the widespread use of the drugs to promote livestock growth, and to the relative trickle of new drugs being developed as possible replacements.

Fauci, who spoke at Harvard Business School’s Spangler Center on October 17, said the slow pace of drug development is largely due to poor economic incentives. Antibiotics tend to be inexpensive and taken by patients for a relatively short time, so there is less demand for them than for drugs for chronic conditions. Further, new antibiotics are used more sparingly so they will remain effective when resistance develops to other drugs, a strategy that, while sound from a public health standpoint, does not boost profits.

Fauci, the keynote speaker at a half-day symposium sponsored by the Harvard Office of Technology Development’s Blavatnik Biomedical Accelerator and the Blavatnik Fellowship in Life Science Entrepreneurship, outlined several strategies to address drug resistance. Those include extending the length of new antibiotic patents so companies have longer to recover development costs, government assistance to “de-risk” antibiotic development by conducting or lowering the cost of the work needed to test drugs and bring them to market, conducting public-education campaigns to change physicians’ prescribing habits, and convincing livestock owners to reduce antibiotic use. 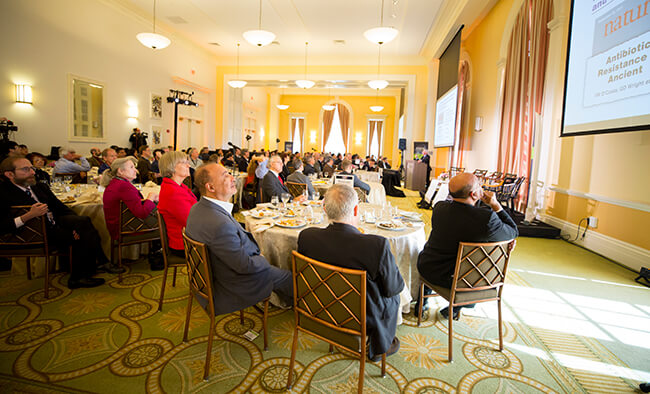 Scientists, entrepreneurs, investors, business leaders, and innovators of all types gathered on the Harvard campus for the FUSION symposium. (Photo by Rose Lincoln/Harvard Staff Photographer.)

The event, which brought together scientists and business experts, reflects the broader strategy of the Blavatnik Biomedical Accelerator. The fund provides support to develop discoveries in Harvard’s labs to the point where they may attract support from the business world. Similarly, the Blavatnik Fellowship pairs recent HBS alumni with labs to help commercialize discoveries that have market potential. The fund has provided $17 million for 93 projects across the University since it was founded in 2007, while the fellows have begun 16 companies that have attracted $145 million in financing.

“This activity furthers our crucial mission as a university to pursue excellence through research and also to have an impact in building a better world,” Faust said.

Harvard Provost Alan Garber introduced Fauci, recalling that as a graduate student he was interested in the idea that any person taking antibiotics could represent a harm to others because of the risk of increasing resistance.

“There was this perception that we’d always be able to invent new antibiotics to deal with newly emerging forms of resistance. In the years since then, we’ve learned that in fact it’s not always possible to come up with new antibiotics, at least not at a great enough rate to overcome the emerging resistance,” Garber said. He quoted Fauci’s writing: “Without a coordinated response, the post-antibiotic age presaged by so many is a distinct and unwelcome possibility.”

In his speech, Fauci detailed some of the factors driving the growth in antibiotic resistance. In some parts of the world antibiotics can be bought without prescription, and patients do that in enormous numbers, particularly in populous nations like China and India. Even in the U.S., prescription use can be flawed. Some 71 percent of adults with acute bronchitis get antibiotics, even though that condition isn’t caused by bacteria. Similarly, 60 percent of adults with sore throats get antibiotics that fight strep throat, though strep is to blame for just 10 percent of cases, Fauci said.

Another major cause of resistance comes from the food we eat. The greatest antibiotic use — 70 percent — is in livestock, and more than half of that isn’t because the animals are sick, but for “growth promotion” in crowded settings.

Antibiotic resistance isn’t some biological aberration, Fauci said; the genes that drive resistance have been found in bacteria thousands of years old. Resistance occurs when an antibiotic doesn’t kill the entire population of a bacteria. The survivors, less susceptible to the drug than their peers, multiply and create a more resistant population. That process is speeded when antibiotics are used when they’re not needed and when patients appropriately prescribed a drug don’t complete the course, leaving the most resistant bacteria to multiply.

In the U.S., Fauci said, experts have their eyes on the rising resistance of several microbes. Among them are Clostridium difficile, which kills 14,000 Americans a year; Neisseria gonorrhoeae, the bacterium that causes gonorrhea; and carbapenem-resistant Enterobacteriaceae, which resists the drugs that are considered the last line of defense when others fail.

There are some signs, however, that warnings are being heard, Fauci said. Public-service campaigns have been mounted to tell consumers that certain ailments can’t be helped by antibiotics. Awareness of antibiotic use in livestock is growing, with San Francisco passing an ordinance that requires major grocery chains to report antibiotic use in the raw meat and poultry they sell. Poultry giant Perdue Farms, meanwhile, has eliminated antibiotics from its chicken-raising operations.

To find new drugs, Fauci suggested exploring existing ones for effectiveness in new uses, changing strategy by searching for drugs that boost the immune system rather than attack an infection, using bacteria-killing viruses called bacteriophages, treating the bacteria’s toxins — which do the damage in the body — rather than the bacteria itself, and manipulating microbial communities in the body by methods such as fecal transplants, which have proven effective against C. difficile.

Perhaps most promising, Fauci said, is more rapid diagnostics. Physicians are often forced to treat infections with broad-spectrum antibiotics because they don’t know for sure what is causing the ailment. Only after lab results come back, which can take days, can physicians tailor prescriptions more narrowly.

Another sign of hope is that approvals of new antibiotics, which had fallen from 1983 until 2012, have begun to increase. But though hopeful, Fauci said much work is still needed.

“What it really is telling us is we are doing a little bit better,” Fauci said. 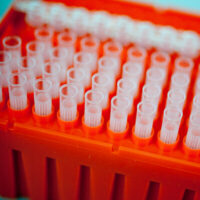