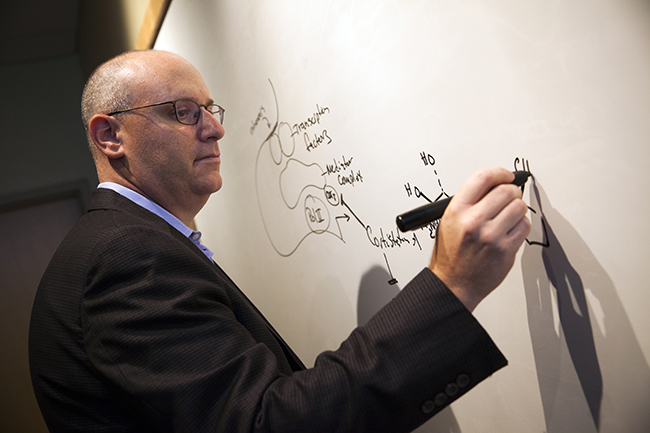 "This is the kind of thing you do science for," said Prof. Matthew Shair. Photo by Stephanie Mitchell/Harvard Staff Photographer.

A team of Harvard researchers and other collaborators led by Professor of Chemistry and Chemical Biology Matthew Shair has demonstrated that a molecule isolated from sea sponges and later synthesized in Shair's lab, can halt the growth of cancerous cells and could open the door to a new treatment for leukemia. The study is described in a September 28 paper in Nature.

"Once we learned this molecule named cortistatin A was very potent and selective in terms of inhibiting the growth of AML cells, we tested it in mouse models of AML and found that it was as efficacious as any other molecule we had seen, without having deleterious effects," Shair said. "This suggests we have identified a promising new therapeutic approach."

It's one that could be available to test in patients relatively soon.

"We synthesized cortistatin A and we are working to develop novel therapeutics based on it by optimizing its drug-like properties," Shair said. "Given the dearth of effective treatments for AML, we recognize the importance of advancing it toward clinical trials as quickly as possible."

The drug development process takes years, but Shair's lab is very close to having what is known as a development candidate that could be taken into late-stage preclinical development and then into clinical trials. An industrial partner will be needed to progress the technology along that path and toward eventual regulatory approval. Harvard's Office of Technology Development (OTD) is engaged in advanced discussions toward that end.

The molecule works, Shair explained, by inhibiting a pair of nearly identical kinases, called CDK8 and CDK19, that his work indicates play a key role in the growth of AML cells.

The kinases operate as part of a poorly understood, massive structure in the nucleus of cells called the mediator complex, which acts as a bridge between transcription factors and transcriptional machinery. Inhibiting these two specific kinases, Shair and colleagues found, doesn't shut down all transcription, but instead has gene-specific effects.

"We treated AML cells with cortistatin A and measured the effects on gene expression," Shair said. "One of the first surprises was that it's affecting a very small number of genes—we thought it might be in the thousands, but it's in the low hundreds."

When Shair, Henry Pelish, a senior research associate in Chemistry and Chemical Biology, and then-Ph.D. student Brian Liau looked closely at which genes were affected, they discovered many were associated with DNA regulatory elements known as "super-enhancers."

"Humans have about 220 different types of cells in their body—they all have the same genome, but they have to form things like skin and bone and liver cells," Shair explained. "In all cells, there are a relatively small number of DNA regulatory elements, called super-enhancers. These super-enhancers drive high expression of genes, many of which dictate cellular identity. A big part of cancer is a situation where that identity is lost, and the cells become poorly differentiated and are stuck in an almost stem-cell-like state."

While a few promising potential cancer treatments have attacked the disease by down-regulating such cellular identity genes, Shair and colleagues were surprised to find that their molecule actually turned up the activity of those genes in AML cells.

"Before this paper, the thought was that cancer is ramping these genes up, keeping the cells in a hyper-proliferative state and affecting cell growth in that way," Shair said. "But our molecule is saying that's one part of the story, and in addition cancer is keeping the dosage of these genes in a narrow range. If it's too low, the cells die. If they are pushed too high, as with cortistatin A, they return to their normal identity and stop growing."

Shair's lab became interested in the molecule several years ago, shortly after it was first isolated and described by other researchers. The early studies suggested it appeared to inhibit just a handful of kinases.

"We tested approximately 400 kinases, and found that it inhibits only CDK8 and CDK19 in cells, which makes it among the most selective kinase inhibitors identified to date," Shair said. "Having compounds that precisely hit a specific target, like cortistatin A can help reduce side-effects and increase efficacy. In a way, it shatters a dogma because we thought it wasn't possible for a molecule to be this selective and bind in a site common to all ~500 human kinases, but this molecule does it, and it does it because of its three-dimensional structure. What's interesting is that most kinase inhibitor drugs do not have this type of three-dimensional structure. Nature is telling us that one way to achieve this level of specificity is to make molecules more like cortistatin A."

Shair's research team successfully synthesized the molecule, which helped them study how it worked and why it affected the growth of a very specific type of cell. Later on, with funding and drug-development expertise provided by Harvard's Blavatnik Biomedical Accelerator, Shair's lab created a range of new molecules that may be better suited to clinical application.

"It's a complex process to make [cortistatin A]—32 chemical steps," said Shair, "but we have been able to find less complex structures that act just like the natural compound, with better drug-like properties, and they can be made on a large scale and in about half as many steps."

"Over the course of several years, we have watched this research progress from an intriguing discovery to a highly promising development candidate," said Isaac Kohlberg, Senior Associate Provost and Chief Technology Development Officer. "The latest results are a real testament to Matt's ingenuity and dedication to addressing a very tough disease."

While there is still much research to be done—in particular, to better understand how CDK8 and CDK19 regulates gene expression—the early results are dramatic.

"This is the kind of thing you do science for," Shair said. "The idea that once every 10 or 20 years you might find something this interesting, that sheds new light on important, difficult problems. This gives us an opportunity to generate a new understanding of cancer and also develop new therapeutics to treat it. We're very excited and curious to see where it goes." 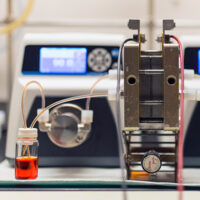