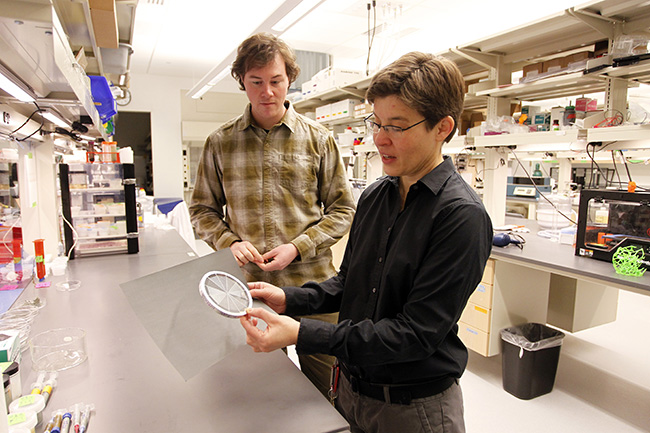 The laboratory of Prof. Jennifer A. Lewis specializes in developing novel "inks" for sophisticated 3D printers. With the help of Harvard's Physical Sciences & Engineering Accelerator, she has also founded a company, Voxel8, to commercialize the 3D printing of electronic devices.

A two-ton printer the size of a small car takes pride of place in Jennifer Lewis’s lab, among half a dozen machines arrayed in a basement on Harvard’s campus. But on a recent weekday morning the room is calm, with only the tunes from a Pandora station (“Lynyrd Skynyrd Radio”) piercing the calm.

Lewis, a professor at the Harvard John A. Paulson School of Engineering and Applied Sciences, is among a generation of engineers who are radically expanding the capabilities of 3-D printing.

That technology emerged about 30 years ago as a way to make fast, precise models of a car, or a plane, or a bridge, before building the real thing. The chief material by far was plastic, heated until molten, and then passed through a nozzle like really hot glue and laid down layer after layer to form a shape first modeled on software.

Decades on, the Lewis lab is in the business of making “ink” for 3-D printers, so that useful, functional objects made of a variety materials, not just plastic, can be produced. Loaded into a cartridge like an office printer, these materials aren’t sprayed on paper.

Instead, they are liquefied and extruded onto a base of choice, maybe paper, maybe metal, maybe a flexible polymer. The lab’s primary goal is to expand the type of objects that can be made in a 3-D printer.

“If we can make matter that affects people’s lives in a material way that would be a tremendous thing to accomplish,” Lewis said.

“Creativity is the limit here in terms of what’s possible,” said Michael McAlpine, a professor at University of Minnesota who is simultaneously working on printing living tissue and electronic inks. In a field in which researchers are racing to run every material imaginable through a printer, the Lewis lab has the edge in working with biological tissue. “She’s certainly a pioneer in doing that,” he said.

Read the entire article in the Boston Globe

Harvard researchers have developed a technique that can quickly change the opacity of a window, turning it cloudy, clear, or somewhere in between with the flick of a switch. 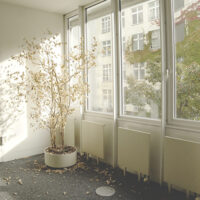