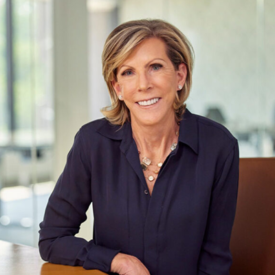 Ms. Giusti is a business leader and a healthcare disrupter with over three decades of experience. Prior to founding the MMRF, from 1992 to 1997, Ms. Giusti held various positions including the Executive Director of Worldwide Arthritis Franchise at G.D. Searle & Company. From 1985 to 1990, Ms. Giusti served as a Marketing Executive for Gillette. Ms. Giusti served as a Sales & Marketing executive at Merck from 1980 to 1983. Ms. Giusti has served on a variety of boards including President Obama’s Precision Medicine Initiative Working Group and served as an advisor to the Biden Moonshot program. She was named to the President’s Council of Advisors on Science and Technology (PCAST), the National Cancer Advisory Board (NCAB), and the National Cancer Policy Board (NCPB). She served on the board of IMS Health and is on the advisory boards of Verily. Ms. Giusti is a member of the FasterCures Non-Profit Council and the Harvard Business School Health Advisory Board.

Ms. Giusti has been named one of Time magazine’s 100 Most Influential People in the World and was ranked #19 on Fortune’s list of the World’s 50 Greatest Leaders. Ms. Giusti received her MBA in general management from Harvard Business School and holds a B.S. and an honorary doctorate from the University of Vermont.

Stay in touch with the series! To receive invitations to future Salon events, join the mailing list.