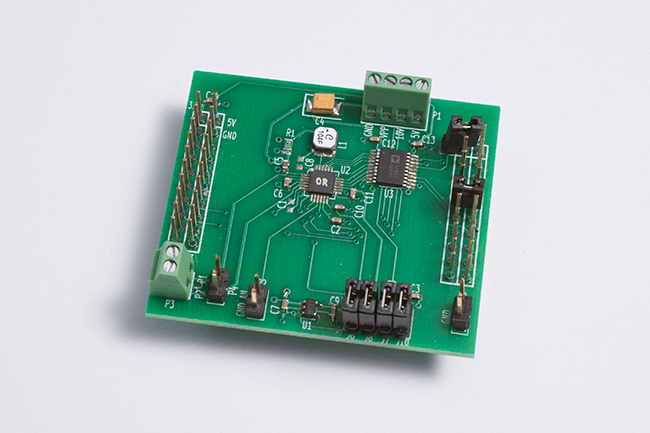 Imagine you are shopping on your iPad for a new merino wool sweater for the winter, and when you visit a retail site, you can not only see countless views of your prospective purchase but you can reach out and feel the texture of the fabric. Or more consequentially: you are a physician performing an operation remotely using a telemedicine application, and you can virtually feel the patient upon whom you are operating.

In the endless quest to create the most dynamic user interfaces, haptic (touch) technology is the looming target for mobile device makers, game companies, and app developers. Having successfully embraced sight and sound, from voice activation to 3D virtual reality, the next sensory frontier is almost upon us: the ability to actually feel an object using a smartphone or tablet.

The challenge is this: haptic technology is power hungry. To create the virtual sensation of touch, motion generators called piezoelectric actuators are required, and those tiny components are battery drainers. For the haptic revolution to become a reality, power-management semiconductors need to be far more efficient.

In the hands of a new startup raising its profile this month, one key to bringing this future a little closer may be a technology created in the lab of Gu-Yeon Wei, the Robert and Suzanne Case Professor of Electrical Engineering and Computer Science at Harvard John A. Paulson School of Engineering and Applied Sciences. 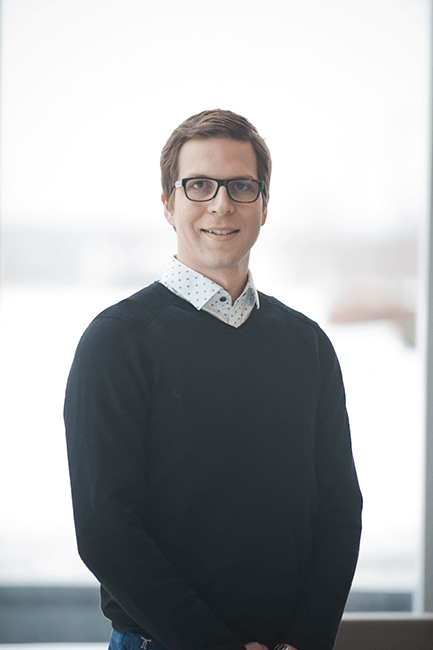 Simon Chaput developed the power-boosting technology as a doctoral student in the lab of Prof. Gu-Yeon Wei at Harvard Paulson School. (Photo courtesy of Boréas Technologies.)

In Wei’s lab, doctoral student Simon Chaput developed the crucial low-power electronics. Chaput put his doctoral studies at Harvard on hold in 2017 and returned to his native Canada to launch a company — Boréas Technologies — around this innovation, with a license from Harvard.

“Our new architecture can reduce power by an order of magnitude from what is out there now,” Chaput explains. “Our technology has the potential to change the way people interact with their electronic devices and with each other remotely. Our customers keep telling us how our technology will enable them to create new products that were not possible before.”

Boréas is based in Bromont, Quebec, an hour’s drive from Montreal. That may seem an unlikely locale for the next hot new thing, but Chaput is confident that his company has the makings of a game-changer. Launched with the advice and strategic support of Harvard’s Office of Technology Development (OTD), Boréas is focused on a very specific target: building low-power-consumption electronics that will enable and empower the haptic revolution now underway.

Haptic technology is not a future fantasy. Touch applications are already nudging into the technology landscape. When your phone vibrates to alert you to an incoming text, for example, that is haptic technology at work. Given that a growing cadre of major technology players are trying to incorporate greater haptic capabilities into their devices, Boréas is already creating partnerships with interested companies and positioning itself to capture the nascent market. “All the key players are in this haptic space right now,” Chaput said. “It’s great to see and hear the virtual world, but it is much better if you can feel it.”

Still at work on the prototypes, Chaput expects to ship products within a year, and his company will be demonstrating the first development kit for the technology at the IEEE Haptics Symposium in March in San Francisco.

Boréas’ story is an illuminating example of the support Harvard OTD offers to faculty and researchers. Chaput and Wei are both quick to credit the office for smoothing the often-rocky path to commercializing an innovation.

“OTD has been great, incredibly supportive,” said Wei. “Being at Harvard really opened the door for Simon. OTD not only patented the technology but they were very good at connecting Simon with potential funders.”

Chaput said that navigating the company launch would have been nearly impossible without OTD’s involvement. “First, we were able to negotiate a very fair deal with Harvard for the license to the technology,” he said. “That was very important for us to raise our seed round. Without the license, nobody would have invested. And OTD offered support as we went through our due diligence.”

According to Sam Liss, executive director of strategic partnerships, OTD’s mission is to maximize the societal impact of the technology that arises from University research, from the engineering school to the medical school, working with more than 800 faculty across the University’s research realm.

“When Simon and Gu expressed interest in a startup, we brought to bear all the resources at our disposal,” Liss said. “We introduced them to venture capitalists to get perspective on the concept and to raise money. We can also introduce them to entrepreneurs who might join the team and provide access to any resources they need to go forward. A big part of all this is education. Most researchers have never done this before.”

Liss and his fellow OTD directors have all had hands-on entrepreneurial or industrial experience, and they understand the difficult strategic decisions Harvard researchers must navigate in order to successfully commercialize their ideas.

To Liss, Chaput exemplifies the entrepreneurial mindset. “What is this brilliant PhD student at Harvard choosing to do? He’s started a semiconductor company in the middle of a highly competitive market and he’s doing it up in Canada,” Liss said. “This is the ultimate David vs. Goliath story.”

Wei is undaunted by that analogy. He acknowledges that big companies such as Texas Instruments and Analog Devices are at work on haptic technology, but “the same could be said for any company coming into a market,” he said. “Remember, search already existed when Google started. More importantly, if you have a unique technology, there is opportunity.”

Chaput said he keeps his mind on the long game. “From my perspective, it has never been about the size of our competitors or our chances to make it,” he said. “It has always been about making a positive impact on our society. Our technology has the potential to change the way people interact with their electronic devices and with each other remotely. This means we have the opportunity to impact the lives of millions of people on a global scale. That’s what motivates me.”

For Chaput, the road to a startup began before he came to Harvard. He had worked on power electronics projects at a semiconductor foundry in Bromont, Quebec, during his master’s studies. When he decided to pursue his doctorate in engineering, he found perfect synergy in Wei’s lab, which specializes in electronics and integrated circuits. Specifically, the lab’s work is aimed at implementing energy-efficient computer devices. Wei was leading a team looking at integrated circuit design and how to make devices more efficient across a wide range of applications.

In 2009, the lab embarked on its most well-known project, the Robobees. That project brought together a variety of researchers in mechanical engineering, electrical engineering and computer science to develop micro-scale robots that would fly autonomously and cooperatively like bees. When Chaput joined the group, Gu suggested he focus on creating circuitry that would generate 200- to 300-volt signals to drive piezoelectric actuators, powered by lithium polymer batteries that deliver only 3 to 4 volts.

Chaput designed a prototype and soon realized there was a commercial opportunity in his design. He connected with OTD, embraced resources from the Harvard Innovation Lab, and participated in the Mass Challenge in 2016. He thought about launching Boréas in Boston, but meeting with obstacles in U.S. immigration, he returned to Canada instead. There, he was able to attract an experienced design team from his past contacts and secure low-cost space inside a state-of-the-art microelectronic R&D center in order to speed up technology development.

“On average we have 20 years’ experience in the development of similar technologies,” Chaput said. “This is a good metric for our value proposition as well as our chance of success.”

“Technologically, it is rock solid,” said Wei, who also serves in a personal capacity on the Boréas advisory board. “He has assembled a good team and strong advisors on the business side. Other than me, everyone on the advisory board has experience on the entrepreneur side. All the chess pieces are in place.” 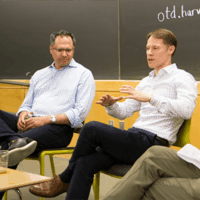