September 27, 2017 - A newly discovered cellular messaging mechanism could lead to a new way to deliver therapeutics to tissues affected by disease, according to a new study from Harvard T.H. Chan School of Public Health. Researchers found that a type of extracellular vesicle (EV)—a sac secreted by cells that contains proteins and RNA molecules—known as ARMMs also carries receptors that allow signaling without direct contact between cells. This capability may make ARMMs uniquely suited to be engineered to send therapeutics directly to affected areas of the body.

“EVs are like messages in a bottle between cells,” said senior author Quan Lu, associate professor of environmental genetics and pathophysiology. “We think that within the next few years, we may be able to swap the endogenous molecules in ARMMs for therapeutic cargos—such as antibodies—and to engineer ARMMs to home in on a particular tissue.”

The study, supported in part by a National Institutes of Health R01grant (R01 HL114769) and by funding from the Blavatnik Biomedical Accelerator, was published online September 27, 2017, in Nature Communications.

There are an estimated 37 trillion cells in the human body—and 100 times that many EVs. They circulate in the blood and other bodily fluids and are involved in processes such as coagulation and the immune response. They can also be hijacked to spread cancer or viruses like HIV and Ebola.

EVs are generating a great deal of interest in the biotechnology field. Researchers believe that the molecules they carry include the fingerprints of disease and harmful environmental exposures. Work is already underway on developing a “liquid biopsy” to test EVs in a drop of blood.

Previous work by Lu’s lab described the body’s mechanism for producing ARMMs. Unlike other EVs, which are generated within cells, ARMMs are secreted directly from the plasma membrane at the cell’s surface. Although the physiological function of ARMMs remains unknown, the way that they are made may make them uniquely suited to carry certain molecules.

In the current study, the researchers found that ARMMs contain molecules used for NOTCH signaling, a type of intercellular communication that normally requires cell-to-cell contact. NOTCH receptors are plasma membrane proteins involved in critical physiological roles such as embryonic development, tissue homeostasis, and stem cell function. According to the new findings, ARMMs are able to facilitate NOTCH receptor signaling at a distance.

“Our research on ARMMs has tremendous potential for therapeutics and public health,” Lu said. While other researchers have explored using EVs to deliver therapeutics, directing them within the body has been an obstacle. Lu believes that ARMMs provide a way past that barrier, and he was recently awarded a patent for generating, isolating, and engineering ARMMs. “It will likely be at least 10 years before we see these methods used in a clinical setting,” Lu said. “But the path forward is clear.”

Findings demonstrate that gut bacteria are potent catalysts of autoimmunity and pancreatic cell function; perturbations in microbiota can precipitate diabetes 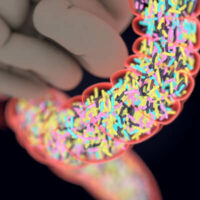