Envisioning the future of food and sleep 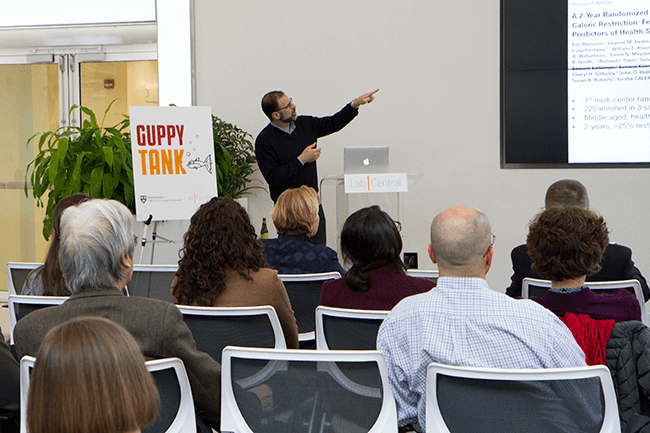 Anyone who has been on a diet can vouch for how difficult it can be to cut down on calories. The good news from Professor James R. Mitchell is that cutting calories isn’t the only path to better health and fitness. Mitchell, an associate professor in the Department of Genetics and Complex Diseases at the Harvard T.H. Chan School of Public Health, has done extensive research on dietary restriction, which has been shown to improve metabolic fitness and increase stress resistance in humans, and extend lifespan in other species. By reducing protein and essential amino acids instead of calories, he says, one can see the benefits of calorie restriction and still eat well.

Mitchell and his research team are now working on two applications of a low-protein diet: One would be a presurgical diet that would bolster a patients’ metabolic strength before a medical procedure; the other a replacement diet that would be used long-term to improve metabolic fitness. Both options, he said in an interview, would be built around a healthy fruit- and vegetable-based, low-protein diet, but served up in ways that would retain their appeal to consumers over time.

Mitchell presented his work at Monday night’s Guppy Tank event, the 11th in a series of presentation-and-networking sessions held by the Office of Technology Development to gather feedback and encouragement for Harvard researchers’ innovative works-in-progress. Loosely patterned on television’s Shark Tank and hosted jointly with LabCentral in Kendall Square, Guppy Tank enables faculty to get strategic guidance from a rotating panel of industry experts, and sometimes to find supporters or collaborators. According to Grant Zimmermann, Director of Business Development at OTD, the event series is designed for projects at an early “guppy” stage. “It’s more a conversation than a formal presentation,” he said. “Most valuable, for our innovation teams, is the opportunity to validate the direction they’re taking in their translational research.” 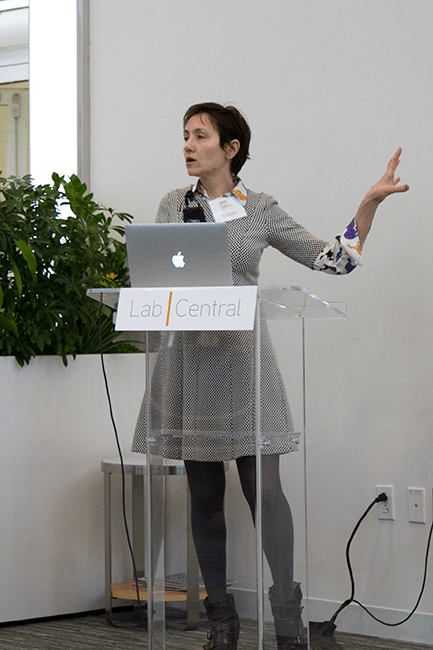 Mitchell’s project was paired with a talk by Dragana Rogulja, Assistant Professor in Neurobiology, and Alexandra Vaccaro, a postdoctoral fellow in her lab at Harvard Medical School. Rogulja and Vaccaro are advancing research to offset the health effects of sleep deprivation. Together, the projects effectively sought to re-examine two of the most basic human needs, food and sleep.

Mitchell began on Monday by citing studies performed in mice, suggesting that protein restriction can promote longevity as reliably as calorie restriction can. Further, he suggested that the benefits of an altered diet begin to show themselves almost immediately, not over time as is often believed. He then posed specific questions to the panel: Whether to apply his findings to develop the presurgical supplement or the long-term diet, whether the product should be naturally-sourced food or a processed shake, and which benefits — longevity, weight loss, better endurance — would be most appealing to the consumer.

Along with offering support, some of the panelists brought up possible obstacles: Joao Siffert, Chief Scientific and Medical Officer of Nestle Health Sciences, mentioned that his company already markets pre- and post-surgery food supplements. While these offer health benefits, he said, they don’t sell especially well, because surgeons don’t tend to talk much to patients about diet. Siffert and Mitchell continued the conversation afterward. While the Nestle product is mainly recommended for a particular gastrointestinal operation, they discussed the potential for one that could be used more broadly for general surgery applications. 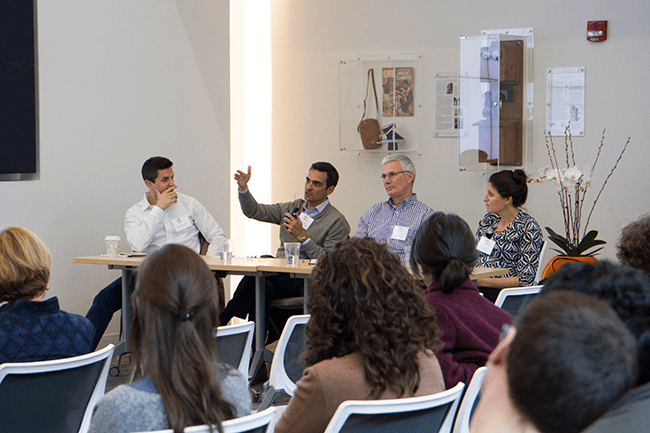 Joao Siffert, Chief Scientific and Medical Officer of Nestle Health Sciences, offered feedback and advice to Harvard innovators, based on his experience in the health care industry. (Photo by Caroline Perry, OTD.)

While it will take time to answer the strategic questions posed, Mitchell said afterward that Guppy Tank was a step forward for both his presurgical and long-term projects. “The take-home for me is that there is interest in developing these products,” he said. “There is a clinical need, and it remains a challenge how best to answer it; it’s really about translation. In the area of a preoperative diet, I wanted to see if there was commercial potential, and I believe there is.”

Likewise, he sensed interest in a consumer diet food that would target proteins. “What’s clear to me is that people eat more protein than they need,” Mitchell said. “Reducing calories is beneficial, but when you reduce protein and amino acids, you activate some of these same beneficial pathways.” One further idea that he is now considering more seriously is the possibility of developing pet food, noting that “our pets share our metabolism, by and large, and have already been shown to benefit from a reduction in total protein in their diet.” 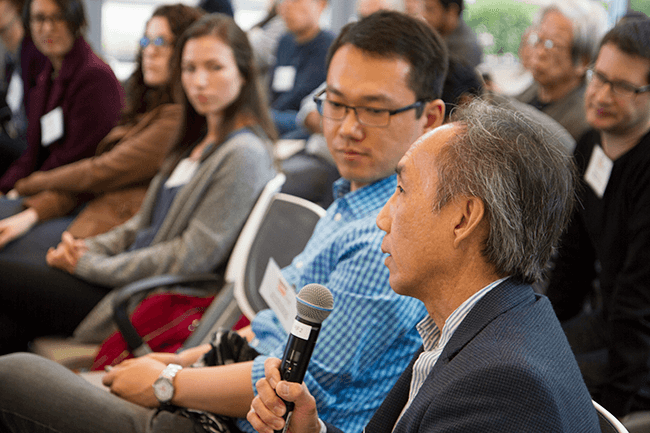 Dominic Tong, an entrepreneur and investor, posed a question to the innovators during the discussion session at Guppy Tank. (Photo by Caroline Perry, OTD.)

Rogulja said that she likewise received useful feedback for her talk with Vaccaro, titled, “I Don’t Want to Go to Sleep!” Acknowledging that she herself doesn’t like sleeping, Rogulja said that nobody fully understands, at a biological level, why sleep is necessary for human survival. She and Vaccaro noted, however, that new studies are looking into the biological effects of sleep deprivation, using fruit flies as a model organism. Like humans (and unlike mice), fruit flies are diurnal and tend to make up for a lost night of sleep with naps the next day. Rogulja and Vaccaro suggested that with the right nutritional supplements, the negative health effects of sleep deprivation might be counteracted in people who either suffer insomnia or simply prefer to sleep less. 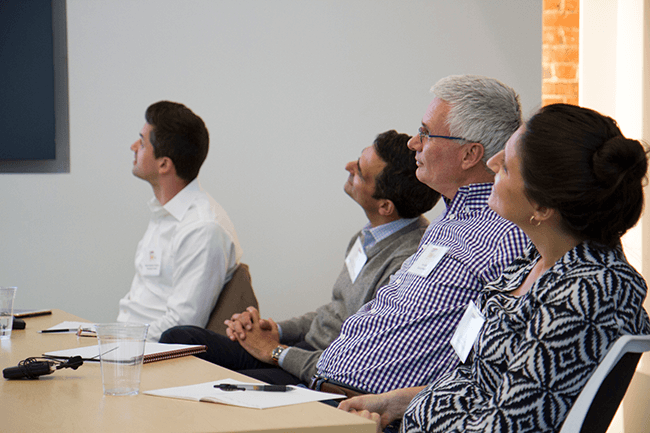 Along with the panel of experts — which included General Catalyst investor Olivia Lew, Puretech Health VP Aleks Radovic-Moreno and Carica Health scientific officer Jim Ellis—the event drew an audience of professionals and Harvard students, who were also allowed time for questions. “The audience has the opportunity to get a vignette of some very early, but quite revolutionary concepts that are emerging from research at Harvard,” said OTD Executive Director Michal Preminger. “In contrast to a Shark Tank setting, in which innovators are restricted to pitching the technological and commercial strengths of their programs, at Guppy Tank, the interaction between Harvard innovators and the external community takes place in an open, conversational, and friendly environment. Our innovators are able to ask the most sensitive questions, share their dilemmas and concerns, and discuss not just the merits of their ideas, but also the wrinkles and limitations.”

The Guppy Tank event presents a practical business advantage as well. “I believe that leaving the Guppy Tank, our innovation teams are equipped with input that will help them advance their nascent technologies towards commercialization with a more well informed and practical approach,” Preminger said. “It seems they have also made some connections that are likely to develop into ongoing mentoring relationships, or even concrete partnering opportunities for the technologies.”

To learn more about how OTD supports faculty and researchers in developing and commercializing their innovations, visit otd.harvard.edu/faculty-inventors