Cambridge, Mass. - April 27, 2016 - Harvard scientists have developed molecules that may help solve one of the most pressing problems in modern agriculture—the rise of insects that are resistant to traits engineered to help crops withstand insect pests.

Using the phage-assisted continuous evolution (PACE) technology developed by Professor of Chemistry and Chemical Biology David Liu and his co-workers, a team of researchers evolved new forms of a naturally occurring insecticidal protein called “Bt toxin.” The newly evolved proteins can be used to assist in controlling Bt toxin resistance in insects.

Liu is the corresponding author of the study, which was co-authored by graduate student Ahmed H. Badran from Harvard’s Department of Chemistry and Chemical Biology, along with Cornell entomologist Ping Wang and a number of collaborating scientists at Monsanto, which produces Bt toxin crops. The work is described in the May 5 issue of Nature, published online April 27.

“Our goal in this collaboration was ambitious,” Liu said. “The key questions were: Can we retarget a Bt toxin to a different insect gut protein by evolving the Bt toxin, and will doing so enable us to kill insects that have become resistant to wild-type Bt toxin? Our hope was to use PACE to help stay ahead of insect resistance.”

The Bt toxin work, however, only scratches the surface when it comes to PACE.

“As the collection of proteins that have been evolved with PACE grows larger and more diverse, I hope that researchers will increasingly use PACE to tackle problems that would be difficult to solve by traditional protein evolution methods,” Liu said. “In the case of Bt toxin, we evolved new Bt toxins containing dozens of amino acid changes over 500 generations in 22 days of PACE. To do that many generations of protein evolution with traditional stepwise methods, at the rate of about one generation per week, might take a decade.”

The PACE platform could be used in a range of fields that would benefit from the rapid evolution of proteins. In health care, for example, it could accelerate the discovery of new therapeutic proteins. Harvard’s Office of Technology Development has granted Monsanto a limited-term exclusive license for the use of the PACE technology in agricultural applications.

“We have been steadily expanding the types of molecular features we can evolve using PACE, and we recently developed a system that selects for proteins with the ability to bind to a target protein,” Liu said.

That development made it possible to tackle the challenge of evolving new forms of Bt toxin, Liu said, because a key step in Bt toxin action is binding to a protein in the insect gut.

Though Liu anticipates that insects may eventually evolve resistance to the evolved Bt toxins, he points out that this system provides the capability of generating many new Bt toxins that target different insect proteins. The work also suggests that it may be possible to evolve Bt toxins that target multiple gut proteins at once, making it far more difficult for insects to evolve resistance.

“The hope is that by applying this strategy, we can overcome what’s considered to be one of the biggest threats to sustaining the yield gains of modern agriculture,” he said.

Ultimately, Liu said, what’s most rewarding about the research is the prospect that its benefits will be felt beyond the laboratory.

“I’m a strong believer that none of our research should die on the pages of a journal,” Liu said. “In an ideal world, all of it should end up benefitting people somehow. Most of the research in our group seeks to achieve this goal by enabling new therapeutics. This collaboration is a great example of a project that is not aimed at the development of new therapeutics, but instead at another important goal, namely trying to protect and improve our ability to feed people.” 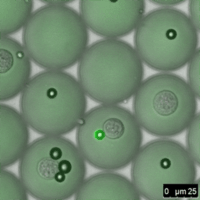