Abstract: The present invention is directed to a bi-stable coupling for controlling the depth of a tool insertion, such as drilling, and similar processes. The bi-stable coupling can be used to penetrate (e.g., drill or push) through a material layer of unknown thickness without plunging the tool into the adjacent layer. In accordance with the invention, in a first state, force is applied to the tool to initiate penetration and a reactive force maintains the device in the first state during penetration and when tool penetrates the material, the reactive force is diminished enabling the device to transition to a second state in which the tool becomes retracted. In medical applications, the invention allows for drilling through bone of unknown thickness without plunging into the adjacent soft tissue.

Abstract: The disclosure provides compositions and methods for treating cell cycle disorders. Compositions of the disclosure include proTAME, a prodrug analog of TAME and apcin, the combination of which inhibits an activity or function of the anaphase promoting complex (APC) by a synergistic mechanism.

Abstract: The present invention generally relates to emulsions, and more particularly, to double and other multiple emulsions. Certain aspects of the present invention are generally directed to the creation of double emulsions and other multiple emulsions at a common junction of microfluidic channels. In some cases, the microfluidic channels at the common junction may have substantially the same hydrophobicity. In one set of embodiments, a device may include a common junction of six or more channels, where a first fluid flows through one channel, a second fluid flows through two channels, and a third or carrying fluid flows through two more channels, such that a double emulsion of a first droplet of the first fluid, contained in a second droplet of the second fluid, contained by the carrying fluid, flows away from the common junction through a sixth channel. Other aspects of the invention are generally directed to methods of making and using such systems, kits involving such systems, emulsions created using such systems, or the like. 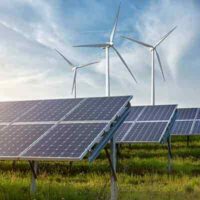