Today, the Wyss Institute for Biologically Inspired Engineering at Harvard University and Australian biotech company The iQ Group Global Ltd. announced that the Institute’s electrochemical eRapid technology has been licensed to Antisoma Therapeutics Pty. Ltd., a subsidiary of The iQ Group Global. The licensing agreement was coordinated by Harvard University’s Office of Technology Development and grants the company exclusive, worldwide access to the Wyss Institute’s sensor technology in the fields of respiratory viral disease, including COVID-19 and the flu, allergic responses and anaphylaxis, and cancer. The agreement enables the company to concertedly develop much-needed point-of-care diagnostics that could put results in the hands of patients and primary health practitioners in real time.

“After we realized in 2019 the enormous future potential of eRapid for monitoring various disease pathologies, we systematically de-risked the technology and successively added and validated the features that enabled it to mature into the powerful diagnostic platform it is today,” said Wyss Institute Founding Director Donald Ingber, M.D., Ph.D. “This license marks an important moment in moving eRapid technology out into the world where it could improve the lives of patients suffering from infectious, immune, or cancer diseases, whose rapid diagnosis requires the detection of multiple biomarkers.”

Ingber also is a lead of the Wyss Institute’s Bioinspired Therapeutics and Diagnostics Platform, where eRapid was conceived and developed, the Judah Folkman Professor of Vascular Biology at Harvard Medical School and Boston Children’s Hospital, and Professor of Bioengineering at the Harvard John A. Paulson School of Engineering and Applied Sciences.

Since 2020, the Wyss Institute has collaborated with The iQ Group Global in an effort to expedite the development of a fast, multiplexed, low-cost COVID-19 biomarker analysis for point-of-care applications. Exchanging sensor prototypes, specific know-how, and product development expertise, the Wyss Institute and The iQ Group Global worked jointly toward combining eRapid technology developed for SARS-CoV-2 detection with The Group’s transistor technology, which is based on Organic Thin Film Transistor Technology (OTFT), and the combination of the two technologies was able to significantly enhance the electrical signals.

Ingber and a multidisciplinary team led by Wyss Senior Staff Scientist Pawan Jolly, Ph.D., in the Institute’s Bioinspired Therapeutics & Diagnostics platform, developed eRapid as a low-cost, affinity-based electrochemical sensing platform that can simultaneously detect and quantify a broad range of biomarkers with high sensitivity and selectivity in a small volume of blood and other complex biological fluids. The technology uses a novel, low-cost, antifouling nanocomposite coating to which ligands for a broad range of biomarkers, including RNAs, proteins, host antibodies, and metabolites can be attached. Upon chemically detecting a target biomarker, the eRapid platform generates an electrical signal within minutes that correlates in strength with the levels of the bound biomarker.

Through an extensive de-risking process, the Wyss team significantly enhanced the applicability and cost-effectiveness of eRapid technology by building multiplexing capabilities into it, which enables each eRapid sensor chip to simultaneously detect multiple biomarkers and produce independent electrical signals for each of them. They replaced the original surface chemistry with a graphene-based chemistry that further enhances biomarker detection, and by streamlining the fabrication of eRapid sensors with a “dip coating method,” reduced the time needed for coating the sensor surface with the graphene chemistry from 24 hours down to less than a minute. This last engineering feat also dramatically decreased the fabrication costs for eRapid sensors and made them storable with minimal loss of electrical signal, which will greatly facilitate their commercialization and increase their usefulness in future point-of-care diagnostic assays, as tests taken remotely can also be sent to central laboratories for their analysis.

Harvard initially granted The iQ Group Global access to the eRapid technology on a non-exclusive basis, for a limited term, in accordance with the University’s commitment to the COVID-19 Technology Access Framework. The Framework enables broad access to emerging technologies to incentivize rapid innovation in pursuit of solutions to combat the pandemic.

“Through different stages of the development and validation process, we have created eRapid-based biomarker panels as precision instruments for several disorders with a strong focus also on COVID-19 detection,” said Jolly. “We are confident that in the hands of Antisoma Therapeutics, our technology will be used to close important diagnostic gaps.” Ingber, Jolly and the eRapid team de-risked eRapid technology in a high-priority Institute Project at the Wyss Institute. Jolly also is the technology lead of the Wyss Diagnostic Accelerator (Wyss DxA), a Wyss initiative enabling the fast creation and validation of diagnostic technologies to solve pressing clinical problems through deep collaboration with clinicians and industry partners.

CEO and Chairman of The iQ Group Global, Dr. George Syrmalis said, “This is a great time that we live in as we become part of the convergence of multiple technologies such as biosensors, 5G connectivity and nano technology. We are on the verge of making personalized medicine not only a reality, but accessible and affordable to everyone.”

“Our priority is to continue developing and commercializing the saliva quantitative COVID test, standardized against the World Health Organization (WHO) reference preparation, which will allow patients and physicians to determine immunity based on antibody load, and thus determine if and when additional vaccination shots are needed," Syrmalis added. "This level of accuracy will rationalize repeat vaccination protocols, increase the efficiency of health care services while dramatically reducing costs to governments and the health care sector.” 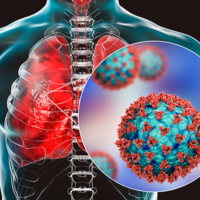