Abstract: A pixel device using optically active fluid contained within elastomeric materials and actuated through dielectric elastomer membrane is disclosed. The underlying mechanism of optical contrast in this display pixel is the spread and contraction of the fluid contained within a pre-stretched elastomer membrane and a substrate. The actuation mechanism for the fluid flow is a dielectric elastomer membrane coated with compliant electrodes on both sides. When both electrodes are connected to a voltage source, the oppositely charged electrodes attract each other, compressing the sandwiched elastomer membrane in the thickness direction but increasing its lateral dimension. Due to geometrical constraint, the change in the membrane lateral dimension results in the net volume change of the fluid reservoir, causing optically active fluid to move from the display cavity into the fluid reservoir or vice versa. The variation of the amount of fluid in the display cavity corresponds to the variation of optical properties, such as contrast and color, of the pixel device.

Abstract: The invention, in some aspects, relates to compounds and compositions useful for inhibiting Type III secretion systems in pathogenic bacteria, such as Yersinia Pestis. In some aspects, the invention relates to methods for discovering inhibitors of the Type III secretion system and uses of such inhibitors in the treatment and prevention of disease.

Abstract: The present invention provides methods and compositions for treating subjects suffering from a disorder associated with a nicotinic acetylcholine receptor (nAChR), methods for treating a subject having a disorder that would benefit from an increase in neural plasticity, and methods for modulating the plasticity of the primary visual cortex in subjects by modulating the expression, stability, and/or activity of Lynx1.

Abstract: Disclosed herein are novel compositions and methods for the inhibition of Plexin B2-mediated Angiogenin activity. Such compositions and methods are useful, for example, for the treatment of cancer, the treatment of wet AMD and the inhibition of angiogenesis. Also disclosed herein are methods of determining whether a test agent is a modulator of Plexin B2 activity.

Abstract: The present disclosure describes a strategy to create self-healing, slippery liquid-infused porous surfaces (SLIPS). Roughened (e.g., porous) surfaces can be utilized to lock in place a lubricating fluid, referred to herein as Liquid B to repel a wide range of materials, referred to herein as Object A (Solid A or Liquid A). SLIPS outperforms other conventional surfaces in its capability to repel various simple and complex liquids (water, hydrocarbons, crude oil and blood), maintain low-contact-angle hysteresis (<2.5°), quickly restore liquid-repellency after physical damage (within 0.1-1 s), resist ice, microorganisms and insects adhesion, and function at high pressures (up to at least 690 atm). Some exemplary application where SLIPS will be useful include energy-efficient fluid handling and transportation, optical sensing, medicine, and as self-cleaning, and anti-fouling materials operating in extreme environments.

A new platform for discovering antibiotics 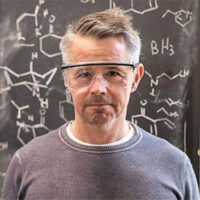