Through the Laboratory for Bioengineering Research and Innovation, Northpond will sponsor SomaCode to support commercialization

The Wyss Institute for Biologically Inspired Engineering at Harvard University and Northpond Ventures have announced that Northpond Labs, the venture capital firm’s research- and development-focused affiliate, has signed an agreement to support a second Wyss project and accelerate its development toward commercialization.

Established in 2020 with the involvement of Harvard’s Office of Technology Development, the five-year strategic research alliance created The Laboratory for Bioengineering Research and Innovation at the Wyss Institute through a $12 million commitment from Northpond Labs to support impactful research with strong translational potential.

The new agreement funds the Wyss Institute’s SomaCode project, led by Soufiane Aboulhouda, Oliver Dodd, and George Church, Ph.D. SomaCode aims to solve a key problem plaguing cell therapies: getting therapeutic cells to their targets in the body so they can interact with diseased cells. SomaCode’s pooled in vivo discovery platform identifies genetic modifications that influence how immune cells actively home to tissues of interest, with the goal of improving immune cell trafficking to solid tumors. Church is a Core Faculty Member at the Wyss Institute and the Robert Winthrop Professor of Genetics at Harvard Medical School.

“The SomaCode project team really impressed us with their systematic approach to addressing a therapeutic challenge, supported by milestone-driven deliverables and entrepreneurial drive. We are very excited to be a part of this project’s continuing development into a commercially viable platform that can meet a major need in cell therapy development and help unlock many potential treatments for debilitating diseases,” said Michael Rubin, Ph.D., Northpond’s Founder and CEO.

SomaCode was named a Wyss Institute Validation Project in 2020 in recognition of its potential for significant positive impact in the treatment of many diseases, and was renewed for a second year of Validation Project funding in 2021. The team is currently working to de-risk the platform and study the biology of cell trafficking in disease conditions.

Read more about the project at the Wyss Institute. 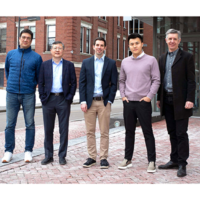