Abstract: Methods and compositions are provided for treating weight related conditions and metabolic disorders by altering microbiota in a subject. One aspect provides methods and compositions to alter microbiota in a subject by administering to the subject a composition that includes a substantially purified microbiota from phyla such as Bacteroidetes, Proteobacteria, Firmicutes and Verrucomicrobia or orders such as Bacteroidales, Verrucomicrobiales, Clostridiales and Enterobacteriales or genera such as Alistipes, Clostridium, Escherichia, and Akkermansia. Another aspect includes a pharmaceutical composition for altering microbiota that includes a therapeutically effective amount of substantially purified microbiota and a pharmaceutically acceptable carrier. Yet another aspect includes methods for treating a disorder, such as obesity, in a subject in need of such treatment by changing relative abundance of microbiota in a gastrointestinal tract of the subject without or in addition to a surgical procedure.

Abstract: Briefly, embodiments of an optical micro-sensor are described.

Abstract: This invention relates to methods for neuroprotection, promoting survival of motor neurons and the treatment of motor neuron diseases by preventing cell signaling through the classic prostaglandin D2 receptor DP1.

Abstract: The present invention discloses a method for the enzyme-mediated, site-specific, in-vivo precipitation of a water soluble molecule in an animal. The enzyme is either unique to tumor cells, or is produced within a specific site (e.g., tumor) at concentrations that are higher than that in normal tissues. Alternatively, the enzyme is conjugated to a targeting moiety such as an antibody or a receptor-binding molecule.

A better way to change the fate of stem cells

Harvard researchers have developed a new, more precise way to control the differentiation of stem cells into bone cells. 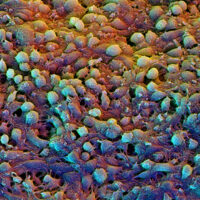