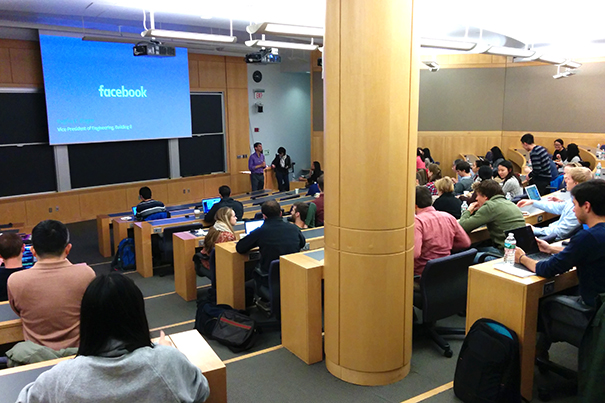 Praising “audacious science and an application that matters,” Facebook VP Regina Dugan spoke during a visit to Harvard on November 7.

December 21, 2016 - When Regina Dugan, Facebook’s Vice President of Engineering and head of Building 8, spoke at Harvard University on November 7, she described the discipline and architecture required for a company or an institution to sustain “a hot cauldron of activity,” producing innovations of lasting impact. Common to the greatest innovations in history, the former director of DARPA said, was a shared passion for advancing “use-inspired basic research”—which is to say: “audacious science and an application that matters.”

Affirming the essential value of transformative research in shaping the future, Harvard’s Office of Technology Development (OTD) has established a collaborative research agreement with Facebook. This master agreement establishes a platform on which Harvard faculty, graduate students, and postdoctoral researchers can quickly and easily pursue joint or sponsored research projects with Facebook, bringing both academic and product-driven perspectives to bear on scientific questions of mutual interest. Harvard is among 17 academic institutions that have signed on to Facebook’s Sponsored Academic Research Agreement (SARA), announced today.

Computer scientists, social scientists, and electrical engineers from Harvard routinely attend the same conferences as Facebook’s internal researchers, each presenting innovative discoveries that inspire new lines of inquiry. The new agreement facilitates the type of interactions and collaborations that naturally arise from this intellectual cross-pollination.

The University currently has similar agreements, typically known at Harvard as strategic research alliances, with companies including BASF, Evotec, UCB, Charoen Pokphand, and a group of Tata companies, among others. These research alliances foster long-term scientific partnerships that can advance discovery in a broad area of science, drawing on strengths from across the University.