Abstract: The present disclosure relates to a device for three-dimensional ink deposition from an impeller-driven active mixing microfluidic printing nozzle. The device is configured to receive a material property associated with the plurality of fluids and receive a structure property of the printing nozzle. The device then determines a threshold relation between a rotating speed ω of an impeller in the nozzle and a volumetric flow rate Q of fluids that flow through the nozzle based on the material property of the plurality of fluids, the structure property of the printing nozzle. Based on the threshold relation, the device then determines an actual volumetric flow rate of the fluids and actual rotation speed of the impeller.

Abstract: Some aspects of this disclosure provide compositions, methods, systems, and kits for controlling the activity of RNA-programmable endonucleases, such as Cas9, or for controlling the activity of proteins comprising a Cas9 variant fused to a functional effector domain, such as a nuclease, nickase, recombinase, deaminase, transcriptional activator, transcriptional repressor, or epigenetic modifying domain. For example, the inventive proteins provided comprise a ligand-dependent intein, the presence of which inhibits one or more activities of the protein (e.g., gRNA binding, enzymatic activity, target DNA binding). The binding of a ligand to the intein results in self-excision of the intein, restoring the activity of the protein.

Abstract: Biomaterial systems, e.g., gel scaffolds, are used in vivo to recruit immune cells and promote their activation towards a non-inflammatory phenotype, thereby leading suppression of inflammation. The compositions and methods are useful to reduce the severity of autoimmunity, chronic inflammation, allergy, and periodontal disease.

Abstract: An assay method is described, which comprises the steps of immobilizing a binding partner (e.g., an antigen or antibody) for an analyte to be detected (e.g., an antibody or antigen) on a portion of a surface of a microfluidic chamber; passing a fluid sample over the surface and allowing the analyte to bind to the binding partner; allowing a metal colloid, e.g., a gold-conjugated antibody, to associate with the bound analyte; flowing a metal solution, e.g., a silver solution, over the surface such as to form an opaque metallic layer; and detecting the presence of said metallic layer, e.g., by visual inspection or by measuring light transmission through the layer, conductivity or resistance of the layer, or metal concentration in the metal solution after flowing the metal solution over the surface.

Biology’s surprising ‘message in a bottle’

In exploring the action of microvesicles, Quan Lu and colleagues at Harvard Chan School are mapping the next frontier of medical diagnostics and drug delivery 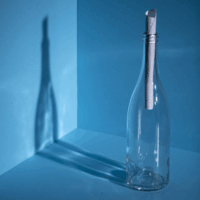