A multi-articulated, soft, pop-up robotic arm. Left: The concept of the system. An endoscope navigates in the GI tract, with detail of the arm mounted at the tip of the endoscope. Right: The soft, pop-up arm performs tissue counter-traction during an ex-vivo test on a porcine stomach. (Image credit: Harvard University.)

August 2, 2017 - Flexible endoscopes can snake through narrow passages to treat difficult to reach areas of the body. However, once they arrive at their target, these devices rely on rigid surgical tools to manipulate or remove tissue. These tools offer surgeons reduced dexterity and sensing, limiting the current therapeutic capabilities of the endoscope.

Now, researchers from the Harvard John A. Paulson School of Engineering and Applied Sciences and the Wyss Institute for Biologically Inspired Engineering at Harvard University have developed a hybrid rigid-soft robotic arm for endoscopes with integrated sensing, flexibility, and multiple degrees of freedom. This arm — built using a manufacturing paradigm based on pop-up fabrication and soft lithography — lies flat on an endoscope until it arrives at the desired spot, then pops up to assist in surgical procedures

The research is described in Advanced Materials Technologies. 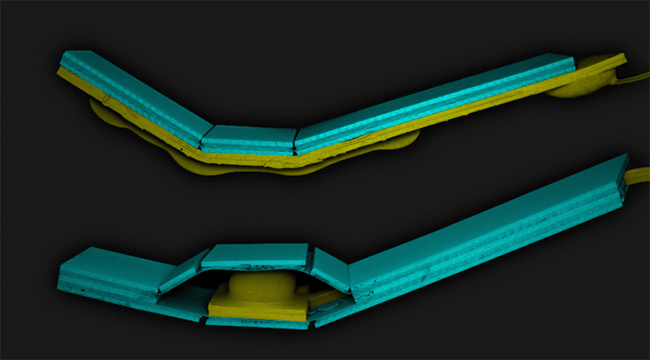 SEM images of the hybrid soft pop-up actuators. The image has been colored in post-processing to differentiate between the soft (yellow) and rigid (blue) structure. (Image credit: Wyss Institute at Harvard University.)

Soft robots are so promising for surgical applications because they can match the stiffness of the body, meaning they won’t accidentally puncture or tear tissue. However, at small scales, soft materials cannot generate enough force to perform surgical tasks.

“At the millimeter scale, a soft device becomes so soft that it can’t damage tissue but it also can’t manipulate the tissue in any meaningful way,” said Tommaso Ranzani, a postdoctoral fellow at SEAS and the Wyss Institute and coauthor of the paper. “That limits the application of soft microsystems for performing therapy. The question is, how can we develop soft robots that are still able to generate the necessary forces without compromising safety.”

Inspired by biology, the team developed a hybrid model that used a rigid skeleton surrounded by soft materials. The manufacturing method drew on previous work in origami-inspired, pop-up fabrication, developed by Robert Wood, the Charles River Professor of Engineering and Applied Sciences.

Wood coauthored the paper and is a Core Faculty Member of the Wyss Institute.

Previous pop-up manufacturing techniques — such as those used with the Robobees — rely on actuation methods that require high voltages or temperatures to operate, something that wouldn’t be safe in a surgical tool directly manipulating biological tissues and organs.

So, the team integrated soft actuators into the pop-up system.

“We found that by integrating soft fluidic microactuators into the rigid pop-up structures, we could create soft pop-up mechanisms that increased the performance of the actuators in terms of the force output and the predictability and controllability of the motion,” said Sheila Russo, postdoctoral fellow at SEAS and Wyss and lead author of the paper. “The idea behind this technology is basically to obtain the best of both worlds by combining soft robotic technologies with origami-inspired rigid structures. Using this fabrication method, we were able to design a device that can lie flat when the endoscope is navigating to the surgical area, and when the surgeon reaches the area they want to operate on, they can deploy a soft system that can safely and effectively interact with tissue.”

The soft actuators are powered by water. They are connected to the rigid components with an irreversible chemical bond, without the need of any adhesive. The team demonstrated the integration of simple capacitive sensing that can be used to measure forces applied to the tissue and to give the surgeon a sense of where the arm is and how it’s moving. The fabrication method allows for bulk manufacturing, which is important for medical devices, and allows for increased levels of complexity for more sensing or actuation. Furthermore, all materials used are biocompatible.

The arm is also equipped with a suction cup — inspired by octopus tentacles — to safely interact with tissue. The team tested the device ex vivo, simulating a complicated endoscopic procedure on pig tissue. The arm successfully manipulated the tissue safely. 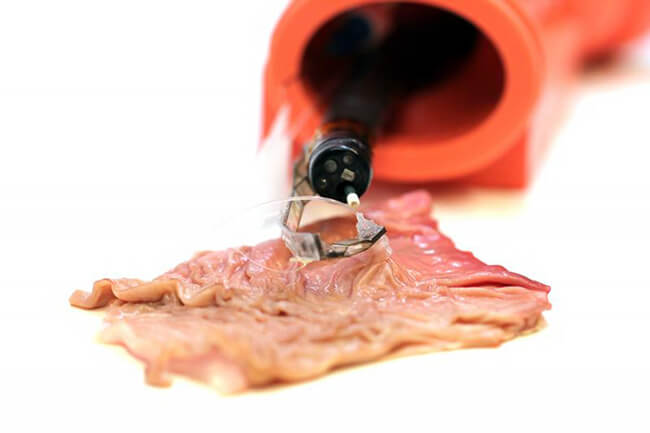 “The ability to seamlessly integrate gentle yet effective actuation into millimeter-scale deployable mechanisms fits naturally with a host of surgical procedures,” said Wood. “We are focused on some of the more challenging endoscopic techniques where tool dexterity and sensor feedback are at a premium and can potentially make the difference between success and failure.”

The researchers demonstrated that the device could be scaled down to 1 millimeter, which would allow it to be used in even tighter endoscopic procedures, such as in lungs or the brain.

Next, the researchers hope to test the device in vivo.

Harvard’s Office of Technology Development has filed a patent application on the technology and is actively seeking commercialization opportunities.

The paper was coauthored by Conor Walsh, the John L. Loeb Associate Professor of Engineering and Applied Sciences and Core Faculty Member of the Wyss Institute.

The research was supported by the DARPA “Atoms to Product” program and the Wyss Institute for Biologically Inspired Engineering.

To learn more about this technology, please contact us.