Boston, Mass. – December 23, 2015 – A new study by researchers from Harvard T.H. Chan School of Public Health and colleagues describes the pre-clinical development of a therapeutic that could potentially be used to treat type 2 diabetes, fatty liver disease, and other metabolic diseases. The researchers developed an antibody that improves glucose regulation and reduces fatty liver in obese mice by targeting a hormone in adipose (fat) tissue called aP2 (also known as FABP4).

The study will be published online December 23, 2015 in Science Translational Medicine.

"The importance of this study is two-fold: first, demonstrating the importance of aP2 as a critical hormone in abnormal glucose metabolism, and secondly, showing that aP2 can be effectively targeted to treat diabetes and potentially other immunometabolic diseases," said Gökhan S. Hotamisligil, J.S. Simmons Professor of Genetics and Metabolism and chair of the Department of Genetics and Complex Diseases and the Sabri Ülker Center at Harvard Chan School.

The work is the product of a collaboration on immunometabolism between the biopharmaceutical company UCB and a team of researchers led by Hotamisligil and lead author M. Furkan Burak, a former Hotamisligil lab member and currently a resident in internal medicine at Mount Auburn Hospital, Cambridge, Mass. Coordinated by Harvard's Office of Technology Development (OTD), the collaboration successfully twins UCB's world-class expertise in monoclonal antibody discovery with Hotamisligil's insight and experience in aP2 biology.

The increase in adipose tissue characteristic of obesity has long been linked to increased risk for metabolic diseases such as type 2 diabetes and cardiovascular disease. Recently, it has become clear that the tissue itself plays an active role in metabolic disease, in part by releasing hormones which act in distant sites such as the liver, muscle, and brain that affect systemic metabolism. Work from the Hotamisligil lab previously identified the protein aP2 as a critical hormone mediating communication between adipose tissue and liver. Since aP2 levels are significantly increased in humans with obesity, diabetes, and atherosclerosis, and mutations that reduce aP2 result in significantly reduced risk of diabetes, dyslipidemia, and heart disease, strategies to modify aP2 function carry promise as new lines of therapeutic entities against these common and debilitating chronic diseases.

In the new study, Burak and colleagues describe the development and evaluation of novel monoclonal antibodies targeting aP2. The team found that one of these antibodies effectively improved glucose regulation in two independent models of obesity. Additionally, beneficial reductions in liver fat were observed.

These monoclonal antibodies have the potential to be transformative first-in-class therapeutics to fight obesity-related metabolic and immunometabolic disease, say the authors. This work is still at the preclinical stage and will require extensive evaluation for safety and effectiveness before being considered for use in humans.

The study was supported under a sponsored research agreement between Harvard and UCB, and Harvard OTD has licensed the technology to UCB.

Cambridge-based startup is commercializing technology from the Harvard lab of George Whitesides. 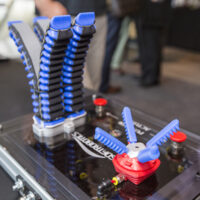