Researchers in Dr. Donald Coen’s lab have identified molecules that inhibit human cytomegalovirus (HCMV) virion egress from the cell, effectively inhibiting HCMV replication. The team is looking to expand on these findings in collaborations that would allow larger medicinal chemistry screenings to more potently and specifically inhibit HCMV activity.

Human cytomegalovirus (HCMV) is a herpesvirus that causes severe disease in newborns and immunocompromised adults. Despite the serious repercussions of the infection, to date there is no effective vaccine against HCMV, and the standard-of-care treatments have major drawbacks in terms of toxicity, pharmacokinetics, and drug resistance. The discovery was made in lab through efforts to investigate the biology of HCMV with the overall goal of developing novel therapeutic strategies for the disease.

During these efforts, the team identified a two-subunit protein conserved among all herpesviruses, known as the nuclear egress complex (NEC), which orchestrates transfer of newly formed virions from the nucleus to the cytoplasm. Through characterization of the NEC structure, the researchers identified a binding site that allows for NEC inhibition and identified compounds that inhibit HCMV replication when bound to this NEC binding site. These findings represent a novel therapeutic strategy for HCMV through disruption of the NEC.

This work has been published in The Embo Journal. 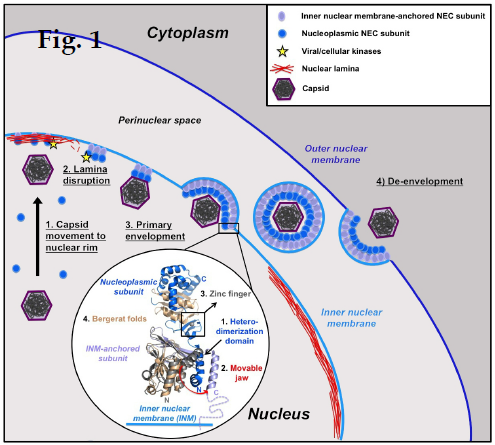