A step forward in DNA base editing 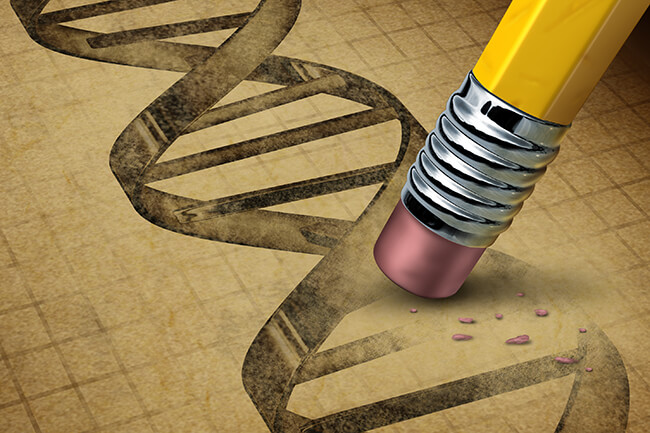 A new genome editing system developed in the lab of Prof. David Liu can convert an A•T base pair to a G•C base pair with efficiency often exceeding 50 percent. (Image © Lightspring/Shutterstock.)

Scientists at Harvard University and the Broad Institute of MIT and Harvard have developed a new class of DNA base editor that can alter genomic structure to help repair the type of mutations that account for half of human disease-associated point mutations. These mutations are associated with disorders ranging from genetic blindness to sickle-cell anemia to metabolic disorders to cystic fibrosis.

A team of researchers led by David Liu, professor of chemistry and chemical biology at Harvard University and a core institute member of the Broad, developed an adenine base editor (ABE) capable of rearranging the atoms in a target adenine (A), one of the four bases that make up DNA, to resemble guanine (G) instead, and then tricking cells into fixing the other DNA strand to make the change permanent. The result is that what had been an A•T base pair is changed to a G•C base pair. The new system is described in a paper published online today in the journal Nature.

The new system transforms A•T base pairs into G•C base pairs at a target position in the genome of living cells with surprising efficiency, the researchers said, often exceeding 50 percent, with virtually no detectable byproducts such as random insertions, deletions, translocations, or other base-to-base conversions. The adenine base editor can be programmed by researchers to target a specific base pair in a genome using a guide RNA and a modified form of CRISPR-Cas9 that no longer cuts double-stranded DNA.

Being able to make this type of conversion is particularly important because approximately half of the 32,000 disease-associated point mutations already identified by researchers are a change from a G•C base pair to a A•T base pair.

Liu said that particular change is unusually common in part because about 300 times a day in every human cell, a spontaneous chemical reaction converts a cytosine (C) base into uracil (U), which behaves like thymine (T). While there are natural cellular repair mechanisms to fix that spontaneous change, the machinery is not perfect and occasionally fails to make the repair. The result can be the mutation of the G•C base pair to an A•U or A•T base pair, which can lead to certain genetic diseases.

“Because of this slight chemical instability of the Cs in our genome, about 50 percent of pathogenic point mutations in humans are of the type G•C to A•T,” said Liu said. “What we’ve developed is a base editor, a molecular machine, that in a programmable, irreversible, efficient, and extremely clean way can correct these mutations in the genome of living cells. For some target sites, that conversion reverses the mutation that is associated with a particular disease.”

A major addition to genome-editing technologies, the adenine base editor joins other base-editing systems recently developed in Liu’s lab, such as BE3 and its improved variant, BE4. Using these base editors, researchers can now correct all the so-called “transition” mutations — C to T, T to C, A to G, or G to A — that together account for almost two-thirds of all disease-causing point mutations, including many that cause serious illnesses that currently have no treatment. Additional research is needed to enable the adenine base editor to target as much of the genome as possible, as Liu and his students previously did through engineering variants of BE3.

At first glance, Liu said, it might appear as though developing the adenine base editor would be a straightforward process: Simply replace the enzyme in BE3 that performs the “chemical surgery” to transform C into U with one that could convert A into I (inosine), a nucleotide that behaves similarly to G. Unfortunately, he said, there is no such enzyme that works in DNA, so Liu and colleagues made the unusual choice to evolve their own DNA adenine deaminase, a hypothetical enzyme that would convert A to I in DNA.

“This wasn’t a small decision, because we’ve had a longstanding rule in the lab that if step one of your project is to evolve the starting material that’s needed for the rest of the project to begin, that’s not a very good project, because it’s really two major projects,” Liu said. “And if you have to spend years just to get the starting material for the rest of your project, that’s a tough road.

“In this case, we felt the potential impact was significant enough to break the rule, and I’m very fortunate that Nicole [Gaudelli] was brave enough to take on the challenge.”

The stakes were particularly high for Gaudelli, Liu said, “because if we weren’t able to complete step one and evolve a DNA adenine deaminase, then step two wouldn’t go anywhere, and we would have little to show for all the work.”

“Protein evolution is still largely an art as much as it is a science,” Liu said. “But Nicole has amazing instincts about how to interpret the results from each stage of protein evolution, and after seven generations of evolution, she succeeded in evolving a high-performance A base editor, which we call ABE7.10.”

The road that led to the adenine base editor required more than just evolving the starting material. After a year of work and several initial attempts that resulted in no detectable DNA editing of A•T base pairs, the team began to see the first glimmers of success, Liu said. Following three rounds of evolution and engineering, the adenine base editors were working deceptively well, until the team discovered that the system would only work on certain DNA sequences.

“At that point we could have pulled the trigger and reported a base editor that works well only at certain sites, but we thought the sequence requirements would really limit its usefulness and discourage others from moving the project forward, so we went back to the well of evolution. We changed the selections to force a base editor that would process all sites, regardless of their sequence,” Liu said. “That was a tough call, because at that point we had been working well over a year on the project, and it was very exciting that we were seeing any base editing on A•T base pairs in DNA at all.”

The team restarted its efforts with several additional rounds of evolution and engineering, now testing their adenine base editors against 17 genetic sequences that included all possible combinations of DNA bases surrounding the target A, Liu said. The final ABE7.10 variant edited sites with an average efficiency of 53 percent, and produced virtually no unwanted products.

To demonstrate the adenine base editor’s potential, Liu and colleagues used ABE7.10 to correct a mutation that causes hereditary hemochromatosis in human cells. They also used ABE7.10 to install a mutation in human cells that suppresses a disease, recreating the so-called “British mutation” found in healthy individuals who would normally develop blood diseases like sickle cell anemia. The mutation instead causes fetal hemoglobin genes to remain active after birth, protecting them from the blood diseases.

While the development of the adenine base editor is an exciting development in base editing, more work remains before base editing can be used to treat patients with genetic diseases, including tests of safety, efficacy, and side effects.

“Creating a machine that makes the genetic change you need to treat a disease is an important step forward, but it’s only one part of what’s needed to treat a patient,” Liu said. “We still have to deliver that machine, we have to test its safety, we have to assess its beneficial effects in animals and patients and weigh them against any side effects. We need to do many more things. But having the machine is a good start.”

Licensing inquiries may be directed to the Harvard Office of Technology Development.

Heading off the post-antibiotic age 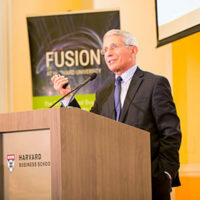