Abstract: The present invention relates to trioxacarcin compounds of the formula: (I) or pharmaceutically acceptable forms thereof; wherein R1, R2, R3, R4, R5, R6, R7, R8, and R9 are as defined herein. The present invention also provides processes for preparing such compounds and intermediates thereto; pharmaceutical compositions comprising such compounds; and methods of use and treatment.

Abstract: An interconnect structure for integrated circuits for copper wires in integrated circuits and methods for making the same are provided. Mn, Cr, or V containing layer forms a barrier against copper diffusing out of the wires, thereby protecting the insulator from premature breakdown, and protecting transistors from degradation by copper. The Mn, Cr, or V containing layer also promotes strong adhesion between copper and insulators, thus preserving the mechanical integrity of the devices during manufacture and use, as well as protecting against failure by electromigration of the copper during use of the devices and protecting the copper from corrosion by oxygen or water from its surroundings. In forming such integrated circuits, certain embodiments of the invention provide methods to selectively deposit Mn, Cr, V, or Co on the copper surfaces while reducing or even preventing deposition of Mn, Cr, V, or Co on insulator surfaces. Catalytic deposition of copper using a Mn, Cr, or V containing precursor and an iodine or bromine containing precursor is also provided.

Abstract: The methods and compositions described herein relate to the identification, isolation, and characterization of genes which encode proteins useful for the biosynthesis of transglycosylase inhibitors such as moes. The methods and compositions also relate to the production of such proteins, and their use in the synthesis of moes, the expression of moes, and the production of modified moes.

Abstract: A method and apparatus for delivering one or more fluids. Fluids may be delivered sequentially from a common vessel to a chemical, biological or biochemical process. 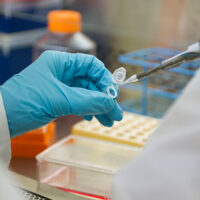