Innovations in the detection of chiral molecules, treatment of lipodystrophy, encapsulation methods, separation of biological analytes, early detection of breast cancer, and more

Abstract: The present invention provides high throughput assays for identifying compounds that modulate a contractile function, as well as devices suitable for these assays.

NAD biosynthesis and precursors for the treatment and prevention of cancer and proliferation
U.S. Patent 9,877,981 (January 30, 2018)

Abstract: Disclosed herein are novel compositions and methods for the treatment of age-related diseases, mitochondrial diseases, the improvement of stress resistance, the improvement of resistance to hypoxia and the extension of life span. Also described herein are methods for the identification of agents useful in the foregoing methods. Methods and compositions are provided for the treatment of diseases or disorders associated with mitochondrial dysfunction. The invention relates to methods for treatment and prevention of cancer by administering agents that increase levels of NAD+, such as NAD+ precursors or agents involved in NAD+ biosynthesis.

Abstract: The present invention contains a printing apparatus and a method, e.g., for ejecting inks (i.e. pure liquids, mixtures, colloids, etc.) for a very broad range of physical properties (such as viscosity). Acoustic forces 3a may be generated by an emitter 1 and a reflector 2 to detach droplets 10 from a nozzle 6. The ink may be advanced through the nozzle 6 by a standard back pressure system 5. A reflectorless chamber 7 may enhance acoustic forces 8a and the droplets 10 may be ejected at a bottom 9 of said chamber 7, so that droplets 10 may be deposited on any substrate 11.

Abstract: A method of reducing a symptom of a clinical disorder characterized by aberrantly elevated circulating aP2 is carried out by administering to a subject an inhibitor of secreted aP2, secretion of aP2, or a serum aP2 blocking agent. For example, glucose intolerance is reduced following administration of such an inhibitor or agent. Exemplary compositions inhibit cellular secretion of aP2 or bind to circulating aP2, thereby reducing the level or activity of aP2 in blood or serum.

Next generation of robots crawl, run, fly into the real world

Harvard scientists help drive new age of machines, aiming for transformative impact in medicine, on Main Street, and beyond 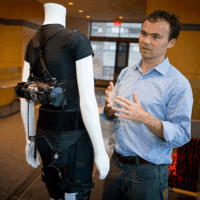