Abstract: An aqueous multi-phase system for diagnosis of sickle cell disease is described, including two or more phase-separated phases including: a first aqueous phase including a first phase component and having a first density between about 1.025 g/cm3 and about 1.095 g/cm3; and a second aqueous phase including a second phase component and having a second density between about 1.100 g/cm3 and about 1.140 g/cm3; wherein the first density is lower than the second density; and each of the first and second phase components include at least one polymer.

Antony Orth and Kenneth B. Crozier

Abstract: The disclosed subject matter can provide a nanotube-reinforced polymer composite material comprising a plurality of nanotubes, each nanotube being formed of a plurality of cyclic peptide molecules, disposed within a polymer matrix, such as a biodegradable polymer matrix. A cyclic polymer, such as a cyclic 8-mer, composed of amino acid residues of alternating absolute configurations (D/L, R/S), can self-assemble into nanotubes useful for preparation of the composite polymer material of the invention. For example, the cyclic peptide (QL)4, wherein the glutamine and leucine residues are of opposite absolute configuration, self-assembles into nanotubes, which when formed into a reinforced polymer composite including poly(caprolactone), provides a biocompatible material of greater tensile strength and Young's modulus compared to the poly(caprolactone) material alone. The nanotubes can be prepared by a vapor equilibration technique or by a solvent-nonsolvent precipitation technique. The materials of the invention can be used for implants, stents and the like as well as for synthetic ligaments, tendons, cartilage, and bone for use in the living tissue of a patient in need thereof. For example, a spinal fusion cage comprising a PDLLA polymer matrix with a plurality of nanotubes of the invention can exhibit enhanced stiffness.

Abstract: MEMS devices fabricated using inexpensive substrate materials such as paper or fabric, are provided. Using paper as a substrate, low cost, simple to prepare, lightweight, disposable piezoresistive sensors, including accelerometers are prepared. Signal-processing circuitry can also be patterned on the substrate material. The sensors can be utilized as two-dimensional sensors, or the paper substrate material can be folded to arrange the sensors in a three dimensional conformation. For example, three sensors can be patterned on a paper substrate and folded into a cube such that the three sensors are orthogonally positioned on the faces of a cube, permitting simultaneous measurement of accelerations along three orthogonal directions (x-y-z). These paper-based sensors can be mass produced by incorporating highly developed technologies for automatic paper cutting, folding, and screen-printing. Also provided are methods of modifying paper for use as a substrate material in MEMS devices.

Abstract: Antibody molecules that specifically bind to PD-1 are disclosed. The anti-PD-1 antibody molecules can be used to treat, prevent and/or diagnose cancerous or infectious conditions and disorders.

Abstract: The present disclosure describes a strategy to create self-healing, slippery liquid-infused porous surfaces (SLIPS) that can be modified as desired. Roughened (e.g., porous) surfaces can be utilized to lock in place a lubricating fluid, referred to herein as Liquid B to repel a wide range of objects, referred to herein as Object A (Solid A or Liquid A). Use of an external stimuli or degradation of the Liquid B can be utilized to change the characteristics of SLIPS structures reversibly or irreversibly that may be desired in a number of different applications. Numerous characteristics, such as adhesion, optical, mechanical, and the like, can be dynamically changed.

Douglas A. Melton and Qiao Zhou

Abstract: The present invention relates generally to microfluidic structures, and more specifically, to microfluidic structures and methods including meandering and wide channels. Microfluidic systems can provide an advantageous environment for performing various reactions and analyses due to a reduction in sample and reagent quantities that are required, a reduction in the size of the operating system, and a decrease in reaction time compared to conventional systems. Unfortunately, the small size of microfluidic channels can sometimes result in difficulty in detecting a species without magnifying optics (such as a microscope or a photomultiplier). A series of tightly packed microchannels, i.e., a meandering region, or a wide channel having a dimension on the order of millimeters, can serve as a solution to this problem by creating a wide measurement area. Although this invention mainly describes the use of meandering and wide channels in heterogeneous immunoassays on a microfluidic chip, this invention could be used for amplifying optical signals for other types of reactions and/or assays.

Abstract: Methods to systematize the development of machines using inexpensive, fast, and convenient fabrication processes are disclosed. In an embodiment, a folding pattern and corresponding circuit design can provide the blueprints for fabrication. The folding pattern may be provided (e.g. laser machined) on a flat sheet of substrate material, such as a polymer. The circuit pattern may be generated by etching or applying (e.g. sputtering) a copper foil layer onto the substrate. Circuit components and actuators may then be added at specified locations. The flat substrate may then be folded along the predefined locations to form the final machine. The machine may operate autonomously to perform a task.

Abstract: A method of introducing a nucleic acid sequence into a cell is provided where the cell has impaired or inhibited or disrupted DnaG primase activity or impaired or inhibited or disrupted DnaB helicase activity, or larger or increased gaps or distance between Okazaki fragments or lowered or reduced frequency of Okazaki fragment initiation, or the cell has increased single stranded DNA (ssDNA) on the lagging strand of the replication fork including transforming the cell through recombination with a nucleic acid oligomer. 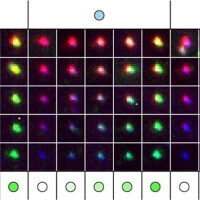