What do astrophysics, telecommunications and pharmacology have in common? Each of these fields relies on polarimeters — instruments that detect the direction of the oscillation of electromagnetic waves, otherwise known as the polarization of light.

Even though the human eye isn’t particularly sensitive to polarization, it is a fundamental property of light. When light is reflected or scattered off an object, its polarization changes and measuring that change reveals a lot of information. Astrophysicists, for example, use polarization measurements to analyze the surface of distant planets, or to map the giant magnetic fields spanning our galaxy. Drug manufacturers use the polarization of scattered light to determine the chirality and concentration of drug molecules. In telecommunications, polarization is used to carry information through the vast network of fiber optic cables. From medical diagnostics to high-tech manufacturing to the food industry, measuring polarization reveals critical data.

Scientists rely on polarimeters to make these measurements. While ubiquitous, many polarimeters currently in use are slow, bulky and expensive.

Now, researchers at the Harvard John A. Paulson School of Engineering and Applied Sciences and Innovation Center Iceland have built a polarimeter on a microchip, revolutionizing the design of this widely used scientific tool.

“We have taken an instrument that can reach the size of a lab bench and shrunk it down to the size of a chip,” said Federico Capasso, the Robert L. Wallace Professor of Applied Physics and Vinton Hayes Senior Research Fellow in Electrical Engineering, who led the research. “Having a microchip polarimeter will make polarization measurements available for the first time to a much broader range of applications, including in energy-efficient, portable devices.”

“Taking advantage of integrated circuit technology and nanophotonics, the new device promises high-performance polarization measurements at a fraction of the cost and size,” said J. P. Balthasar Mueller, a graduate student in the Capasso lab and first author of the paper.

The device is described in the journal Optica. Harvard’s Office of Technology Development has filed a patent application and is actively exploring commercial opportunities for the technology. 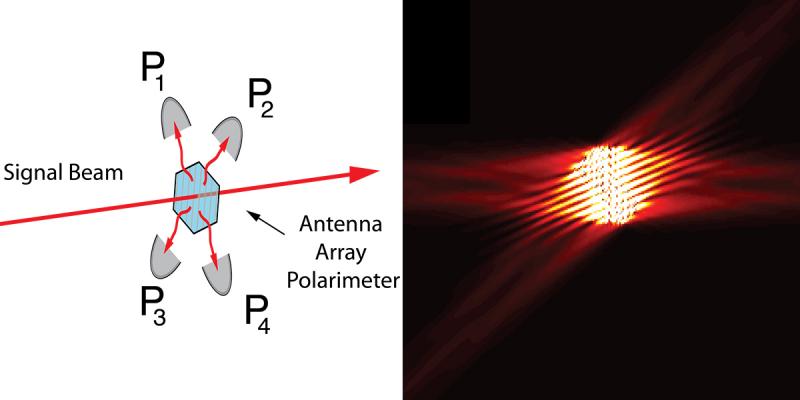 Light from an optical fiber (left) illuminates the metasurface and is scattered in four different directions where it is dected by sensors (right). (Image courtesy of the Capasso Lab/Harvard SEAS)

Capasso’s team was able to drastically reduce the complexity and size of polarimeters by building a two-dimensional metasurface — a nanoscale structure that interacts with light. The metasurface is covered with a thin array of metallic antennas, smaller than a wavelength of light, embedded in a polymer film. As light propagates down an optical fiber and illuminates the array, a small amount scatters in four directions. Four detectors measure the intensity of the scattered light and combine to give the state of polarization in real time.

“One advantage of this technique is that the polarization measurement leaves the signal mostly intact,” said Mueller. “This is crucial for many uses of polarimeters, especially in optical telecommunications, where measurements must be made without disturbing the data stream.”

In telecommunications, optical signals propagating through fibers will change their polarization in random ways. New integrated photonic chips in fiber optic cables are extremely sensitive to polarization, and if light reaches a chip with the wrong polarization, it can cause a loss of signal.

“The design of the antenna array make it robust and insensitive to the inaccuracies in the fabrication process, which is ideal for large scale manufacturing,” said Kristjan Leosson, senior researcher and division manager at the Innovation Center and coauthor of the paper.

Leosson’s team in Iceland is currently working on incorporating the metasurface design from the Capasso group into a prototype polarimeter instrument.

Chip-based polarimeters could for the first time provide comprehensive and real-time polarization monitoring, which could boost network performance and security and help providers keep up with the exploding demand for bandwidth.

“This device performs as well as any state-of-the-art polarimeter on the market but is considerably smaller,” said Capasso. “A portable, compact polarimeter could become an important tool for not only the telecommunications industry but also in drug manufacturing, medical imaging, chemistry, astronomy, you name it. The applications are endless.”

The research was funded by the Air Force Office of Scientific Research and the Icelandic Research Fund.

For Harvard computer scientists, entrepreneurship is often a fulfilling extension of their cutting-edge research. 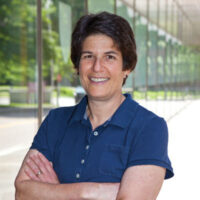