Abstract: The present invention relates to mutants of Cre recombinase.

Ronald Walsworth and Linh My Pham

Abstract: Long spin coherence lifetimes are realized for ensembles of electronic spin impurities in solid state spin systems, for example NV color centers in diamond, by using spin-control RF pulse sequences to provide dynamic decoupling of the ensembles of spin impurities from environmental sources of decoherence such as dipolar and hyperfine interactions with proximal spin and other paramagnetic impurities in diamond. In this way, the measurement sensitivity of the coherent evolution of ensembles of solid state spin impurities are increased. Using the Carr-Purcell-Meiboom-Gill (CPMG) pulse sequence, the spin coherence lifetimes of NV ensembles can be extended to more than 2 ms in room temperature diamond, and sensitivity of magnetometry that uses NV ensembles can be increased.

Abstract: This disclosure relates to terpene solutions of metal precursors used for chemical vapor deposition, atomic layer deposition, spray pyrolysis or misted deposition. The terpenes do not supply impurities such as oxygen or halogens to the material being produced, nor do they etch or corrode them. In spray pyrolysis or misted deposition, small droplets provide uniform coating. Terpenes have high flash points and low flammability, reducing the risk of fires. Terpenes have low toxicity and are biodegradable. They are available in large amounts from renewable, natural plant sources, and are low in cost.

Abstract: The present invention relates to methods for the labeling of nucleic acid polymers in vitro and in vivo. In particular, the methods include a [3+2] cycloaddition between a nucleotide analogue incorporated into a nucleic acid polymer and a reagent attached to a label. Such methods do not require fixation and denaturation and therefore can be applied to the labeling of nucleic acid polymers in living cells and in organisms. Also provided are methods for measuring cellular proliferation. In these methods, the amount of label incorporated into the DNA is measured as an indication of cellular proliferation. The methods of the invention can be used in a wide variety of applications including clinical diagnosis of diseases and disorders in which cellular proliferation is involved, toxicity assays, and as a tool for the study of chromosomes' ultrastructures.

Abstract: The disclosure provides methods, compositions, and kits for enhanced detection of microbes in samples and monitoring of antimicrobial activity in a subject.

Abstract: In various embodiments, training objects are classified by human annotators, psychometric data characterizing the annotation of the training objects is acquired, a human-weighted loss function based at least in part on the classification data and the psychometric data is computationally derived, and one or more features of a query object are computationally classified based at least in part on the human-weighted loss function.

Abstract: The invention provides systems and methods for spatial sequestration of elements in nucleic acid circuits.

Abstract: The invention provides nucleic acid structures of controlled size and shape, comprised of a plurality of oligonucleotides, and methods for their synthesis. The structures are formed, at least in part, by the self-assembly of single stranded oligonucleotides. The location of each oligonucleotide in the resultant structure is known. Accordingly, the structures may be modified with specificity.

Abstract: Soft pneumatic actuators based on composites consisting of elastomers with embedded sheet or fiber structures (e.g., paper or fabric) that are flexible but not extensible are described. On pneumatic inflation, these actuators move anisotropically, based on the motions accessible by their composite structures. They are inexpensive, simple to fabricate, light in weight, and easy to actuate. This class of structure is versatile: the same principles of design lead to actuators that respond to pressurization with a wide range of motions (bending, extension, contraction, twisting, and others). Paper, when used to introduce anisotropy into elastomers, can be readily folded into three-dimensional structures following the principles of origami; these folded structures increase the stiffness and anisotropy of the elastomeric actuators, while keeping them light in weight.

Abstract: A sensor including a layer having viscoelastic properties, the layer comprising a void, the void filled with a fluid; and optionally, a more rigid sensing element embedded within the layer. When a force is applied to a surface of the sensor, the shape of the void changes, causing the electrical resistance of the fluid in the void to change. When included, the more rigid sensing element can bear upon the void to cause the electrical resistance of the fluid in the void to change. A direction and intensity of the force can be determined by measuring the change of the electrical resistance of different voids positioned about the sensing element. The layer can be an elastomer, preferably silicone rubber. The fluid can be a conductive liquid, preferably Eutectic Gallium Indium. The sensing element can be plastic and can have a "Joystick" shape. The voids can take the form of channels or microchannels having a predefined pattern and/or shape.

A step forward in DNA base editing 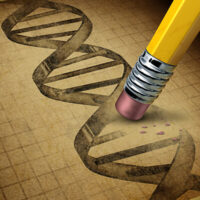