Researchers at Harvard are now developing technologies that could change the way prescription drugs are delivered, potentially fighting cancer and prolonging lives. At a Guppy Tank event on March 5, two of these innovations got their first airing before an expert panel of investors and entrepreneurs.

Imagine, for example, that tiny amounts of fluid could be dispensed with greater accuracy than ever before, fine-tuning the potency of drug doses and making them easier to for the body to absorb. Or that microscopic drug doses could be “backpacked” onto immune cells, better equipping them to target disease. At the 13th session of Guppy Tank, both were unveiled to the panel, which responded with feedback and ideas about how best to partner with industry to drive these innovations toward public benefit. Hosted jointly by Harvard’s Office of Technology Development (OTD) and LabCentral in Cambridge, the event drew a packed room for pitches, discussion, and networking. 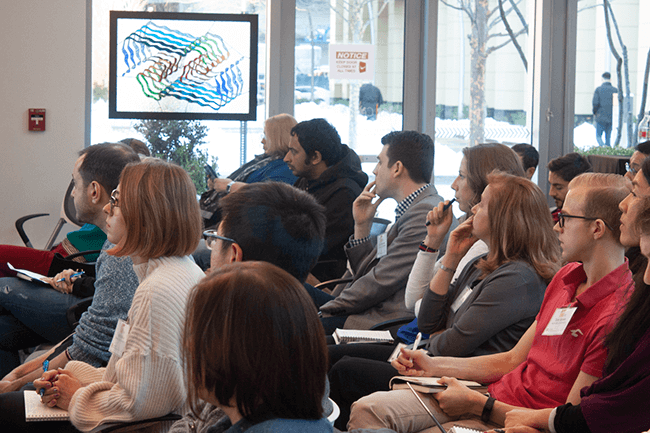 Attendees of Guppy Tank can learn valuable lessons on pitching their ideas, identifying promising applications for a technology, or understanding what it takes for an early-stage innovation to be ready for partnering and investment.

True to its title, the Guppy Tank is about nurturing young projects and providing innovative researchers with strategic guidance from a rotating panel of industry experts. “There aren’t too many venues in the gestation of a company where you can get a supportive environment with this kind of expertise,” said Christopher Petty, a Director of Business Development at Harvard OTD. “At this point, they’ve been doing years of work on the research itself, but are just starting to think about the formation of a company, so it’s great for them to get the feedback. Later, in the world of serious fundraising, there’s more chance you are in a ‘shark tank.’ That can be less constructive, since it can be more about raising money and why an idea might not work.”

Daniele Foresti, a Research Associate in materials science at Harvard’s Wyss Institute for Biologically Inspired Engineering, gave the first presentation, on “Drop-on-Demand Biologics.” He introduced a technology developed in the lab of Jennifer A. Lewis that applies the science of 3D printing to the dispensing of pharmaceutical fluids. Lewis is Hansjörg Wyss Professor of Biologically Inspired Engineering at the Harvard John A. Paulson School of Engineering and Applied Sciences, Jianming Yu Professor of Arts and Sciences, and a core faculty member at the Wyss Institute. Through the Lewis Lab’s innovations in acoustophoretic printing, researchers can use soundwaves to regulate the amount of fluid being dispensed from a nozzle, much like the flow seen in inkjet printing or water falling from a tap. In Foresti’s vision, the tiny droplets would contain precise doses of protein-based drugs. This is an important bit of fine-tuning, because the molecules of biotherapeutic drugs must typically be formulated only in low concentration and are very fragile.

Using the soundwave technology developed by Foresti and the Lewis Lab, the therapeutic molecules can be encapsulated in protective microbeads and formulated as high-concentration liquids, making it possible for drugs that are now delivered intravenously to be injected. This could lower the cost of treatment and increase comfort for patients. “It’s a cutting-edge technology that’s well-suited to the industry,” he told the panel of life-science venture capitalists. 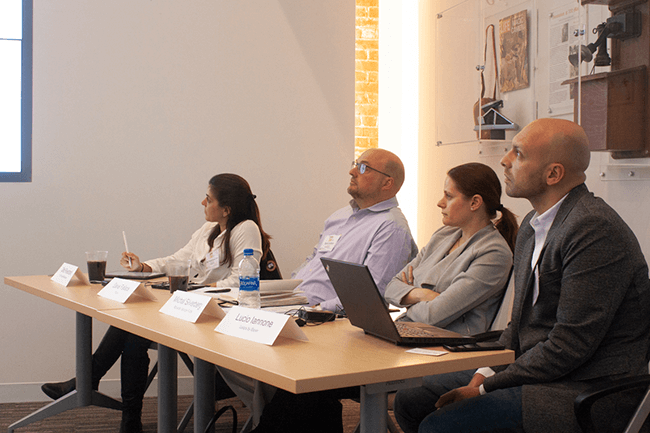 The panel seemed to agree, and suggested ways to refine his presentation for investors.

“I always love the concept of easier and cheaper,” said David Fallace, Advisor at Polaris Partners. “I’d just love to see a little more data in your presentation: What exactly is the point where you feel people are going to get truly excited about this, and what is the money necessary to get to that point?” Deb Palestrant, Partner at 5AM Ventures, liked the lab’s direct collaborations with pharma companies and suggested that Foresti also talk to antibody generation companies. 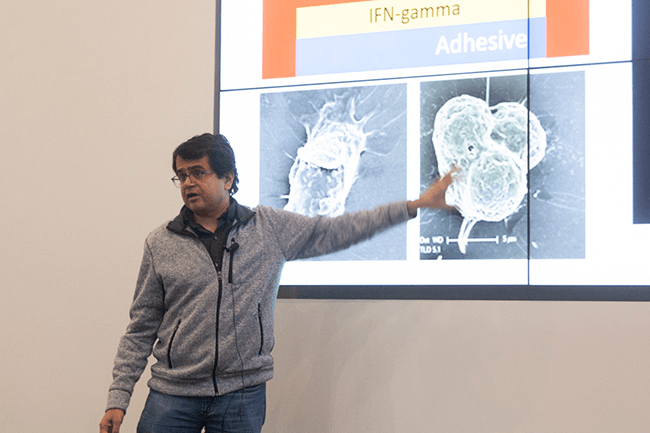 The second presentation, by Samir Mitragotri, introduced a therapeutic approach built on “backpacking” drugs onto macrophages (white blood cells found in the immune system). Mitragotri is Hiller Professor of Bioengineering and Hansjorg Wyss Professor of Biologically Inspired Engineering at Harvard Paulson School and a core faculty member at the Wyss Institute. Macrophages, he said, are highly plastic and influenced by their environment, often becoming inactivated by the same tumors that they attempt to fight. But if a tumor-fighting drug could “hitch a ride” on the macrophage it could then battle the disease more effectively. The cells would be taken from the body, attached to the disease-fighting “backpack,” and then intravenously re-infused.

In the discussion afterward, panelists pressed Mitragotri on some specific points about the treatment. Palestrant asked how a backpacked cell would know where to go; Mitragotri responded that a cancer tumor, likely the dominant inflammation in the body, would naturally attract it. The two other panelists, Michal Silverberg (Managing Director at Novartis Venture Fund) and Lucio Iannone (Director of Venture Investments at Bayer) both suggested alternative applications for backpack treatments, such as targeting inflammatory diseases like atherosclerosis.

The feedback will be valuable as his work goes on, Mitragotri said afterward. “At this point, we are delivering a platform, and it’s always great to hear about the possible applications. We have the technology, and we’re learning about which problems it can solve,” he said. “The most important thing was to get the idea out and to hear different perspectives on the scalability and manufacturing, how it gets used in a larger landscape of technology. That’s where this has the largest value.”

Foresti said he also got some valuable input on how to market the droplet technology in the future. “This was the most pitch-like atmosphere I have ever been in, and it showed me how I might have to change my pitch and evaluate some of the market opportunity,” Foresti said. “What I found interesting was that they seemed to care more about the market, wanting to see more details about the business part. And that was comforting in a way, because there wasn’t much doubt about the technology.”

For more information about the innovations described here and to discuss commercialization opportunities, please contact .(JavaScript must be enabled to view this email address).