Abstract: Methods and compositions for determining the nucleic acid sequence of polynucleotides that are at least 1500 nucleotides in length are provided.

Abstract: The present invention generally relates to systems and methods for the control of fluids and, in some cases, to systems and methods for flowing a fluid into and/or out of other fluids. As examples, fluid may be injected into a droplet contained within a fluidic channel, or a fluid may be injected into a fluidic channel to create a droplet. In some embodiments, electrodes may be used to apply an electric field to one or more fluidic channels, e.g., proximate an intersection of at least two fluidic channels. For instance, a first fluid may be urged into and/or out of a second fluid, facilitated by the electric field. The electric field, in some cases, may disrupt an interface between a first fluid and at least one other fluid. Properties such as the volume, flow rate, etc. of a first fluid being urged into and/or out of a second fluid can be controlled by controlling various properties of the fluid and/or a fluidic droplet, for example curvature of the fluidic droplet, and/or controlling the applied electric field.

Abstract: Disclosed herein are methods of treating cancer in a subject, and methods for inhibiting growth, migration and/or invasion of a cancer cell in the subject, comprising administering to the subject a therapeutically effective amount of an antibody or antigen binding fragment thereof that downmodulates Fzd2. The antibody may specifically bind Fzd2, and may promote internalization of the Fzd2 receptor by the cancer cells and/or prevent ligand binding to Fzd2. Specific antibodies, and also specific portions of the Fzd2 molecule for antibody binding are disclosed. In one embodiment the antibody specifically binds to the epitope HGAEQICVGQNHSEDGAPAL (SEQ ID NO: 1). Specific cancers (e.g. late stage hepatocellular carcinoma), intended for treatment are provided, and include cancers that exhibit overexpression of Fzd2, and/or Wnt5a.

Abstract: A method for depositing a film on a polymer substrate is disclosed. The method includes exposing a polymer substrate to a liquid comprising a first reactant to provide a plurality of reactive sites over the polymer substrate, wherein the first reactant comprises aluminum or boron; and introducing a second reactant comprising silicon in a vapor form to said plurality of reactive sites that provide a catalytic growth of the film, wherein the growth of the film is self-limited. In certain embodiments, the film can include silica, aluminum silicate, or borosilicate.

Abstract: Disclosed are methods of inducing differentiation of stem into myogenic cells without gene manipulation and for inducing proliferation of satellite cells. The cells can be used as a source of cells for transplantation in a subject in need thereof. Also disclosed is a screening assay for screening test compounds using blastomere cultures.

Abstract: A miniature optical biosensor and biosensor array where high sensitivity for detection of biomolecular interaction does not require a fluorescent label. Non-linear frequency-shifts of optical resonators ('nanobeams') provide a digital all-or-nothing response to equilibrium binding of a biomarker to surface-immobilized bio-recognition elements, a signal suitable to identify active components in genetic and proteomic circuits, as well as toxic substances. The threshold level for the digital response is adjustable to accommodate for varying receptor affinities. A bistable cavity sensing (BCS) method can be used to track the shift of the resonance induced by the analyte more precisely than the conventional cavity sensing method, where the resolution is limited by the cavity linewidth. BCS method can be used to quantitate the concentration of the analyte, and their binding kinetics, affinities and etc. 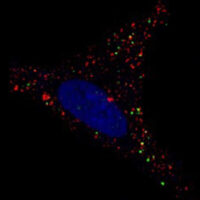