Sticky when wet: A strong adhesive for wound healing

July 27, 2017 - Anyone who has ever tried to put on a Band-Aid® when their skin is damp knows that it can be frustrating. Wet skin isn't the only challenge for medical adhesives; the human body is full of blood, serum, and other fluids that complicate the repair of numerous internal injuries. Many of the adhesive products used today are toxic to cells, inflexible when they dry, and do not bind strongly to biological tissue. 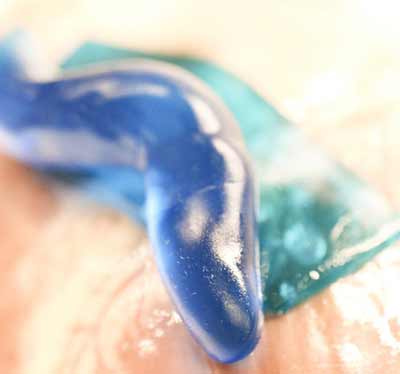 A new, flexible adhesive material adheres to biological tissues, even when wet, without causing toxicity. It can be formed into either sheets (teal blue) or custom shapes (dark blue). (Credit: Wyss Institute at Harvard University.)

A team of researchers from the Wyss Institute for Biologically Inspired Engineering and the Harvard John A. Paulson School of Engineering and Applied Sciences (SEAS) has created a super-strong "tough adhesive" that is biocompatible and binds to tissues with a strength comparable to the body's own resilient cartilage, even when they're wet.

"The key feature of our material is the combination of a very strong adhesive force and the ability to transfer and dissipate stress, which have historically not been integrated into a single adhesive," says corresponding author Dave Mooney, Ph.D., who is a founding Core Faculty member at the Wyss Institute and the Robert P. Pinkas Family Professor of Bioengineering at SEAS. The research is reported in this week's issue of Science.

When first author Jianyu Li, Ph.D. (former Postdoctoral Fellow at the Wyss Institute and now an Assistant Professor at McGill University) started thinking about how to improve medical adhesives, he found a solution in an unlikely place: a slug. The Dusky Arion (Arion subfuscus), common in Europe and parts of the United States, secretes a special kind of mucus when threatened that glues it in place, making it difficult for a predator to pry it off its surface. This glue was previously determined to be composed of a tough matrix peppered with positively charged proteins, which inspired Li and his colleagues to create a double-layered hydrogel consisting of an alginate-polyacrylamide matrix supporting an adhesive layer that has positively-charged polymers protruding from its surface.

The polymers bond to biological tissues via three mechanisms — electrostatic attraction to negatively charged cell surfaces, covalent bonds between neighboring atoms, and physical interpenetration — making the adhesive extremely strong. But the matrix layer is equally important, says Li: "Most prior material designs have focused only on the interface between the tissue and the adhesive. Our adhesive is able to dissipate energy through its matrix layer, which enables it to deform much more before it breaks." The team's design for the matrix layer includes calcium ions that are bound to the alginate hydrogel via ionic bonds. When stress is applied to the adhesive, those "sacrificial" ionic bonds break first, allowing the matrix to absorb a large amount of energy before its structure becomes compromised. In experimental tests, more than three times the energy was needed to disrupt the tough adhesive's bonding compared with other medical-grade adhesives and, when it did break, what failed was the hydrogel itself, not the bond between the adhesive and the tissue, demonstrating an unprecedented level of simultaneous high adhesion strength and matrix toughness.

The researchers tested their adhesive on a variety of both dry and wet pig tissues including skin, cartilage, heart, artery, and liver, and found that it bound to all of them with significantly greater strength than other medical adhesives. The tough adhesive also maintained its stability and bonding when implanted into rats for two weeks, or when used to seal a hole in a pig heart that was mechanically inflated and deflated and then subjected to tens of thousands of cycles of stretching. Additionally, it caused no tissue damage or adhesions to surrounding tissues when applied to a liver hemorrhage in mice — side effects that were observed with both super glue and a commercial thrombin-based adhesive.

Such a high-performance material has numerous potential applications in the medical field, either as a patch that can be cut to desired sizes and applied to tissue surfaces or as an injectable solution for deeper injuries. It can also be used to attach medical devices to their target structures, such as an actuator to support heart function. "This family of tough adhesives has wide-ranging applications," says co-author Adam Celiz, Ph.D., who is now a Lecturer at the Department of Bioengineering, Imperial College London. "We can make these adhesives out of biodegradable materials, so they decompose once they've served their purpose. We could even combine this technology with soft robotics to make sticky robots, or with pharmaceuticals to make a new vehicle for drug delivery."

"Nature has frequently already found elegant solutions to common problems; it's a matter of knowing where to look and recognizing a good idea when you see one," says Wyss Founding Director Donald Ingber, who is also the Judah Folkman Professor of Vascular Biology at Harvard Medical School and the Vascular Biology Program at Boston Children's Hospital, as well as a Professor of Bioengineering at Harvard SEAS. "We are excited to see how this technology, inspired by a humble slug, might develop into a new technology for surgical repair and wound healing."

To learn more about this technology, please contact us.