The Wyss Institute for Biologically Inspired Engineering at Harvard University has announced that its athlete microbiome-based technology will be commercialized by Fitbiomics Inc., a recently formed startup company, to develop highly validated probiotics based on elite athletes’ microbiomes, which could improve athletic performance and, conceivably, even overall health. The announcement follows an exclusive licensing agreement between Harvard’s Office of Technology Development (OTD) and FitBiomics. 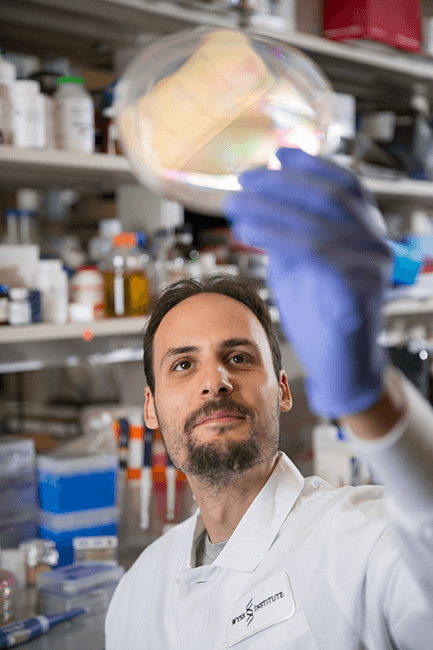 Harvard researchers Jonathan Scheiman (shown here) and Prof. George Church developed the concept that the intestinal microbiome of elite athletes harbors higher number of specific bacteria that can assist with their performances and lead to the development of highly validated probiotics. (Image: Wyss Institute at Harvard University.)

The concept behind the new technology — developed by former Wyss Institute postdoctoral fellow Jonathan Scheiman, Ph.D. and Wyss Institute Core Faculty member George Church, Ph.D., in the Institute’s Synthetic Biology Platform — holds that elite athletes harbor higher numbers of certain types of bacteria in their gut microbiomes (the commensal microbes populating the intestinal tract) that support or perhaps drive optimal levels of performance and recovery during and after challenging athletic events. Church is also the Robert Winthrop Professor of Genetics at Harvard Medical School and Professor of Health Sciences and Technology at Harvard University and the Massachusetts Institute of Technology (MIT).

A proof-of-concept study recently published in Nature Medicine led by Scheiman, Church, and Aleksandar Kostic, Ph.D., a collaborator at Joslin Diabetes Center in Boston, showed that a specific bacterial strain of Veillonella bacteria, V. atypica, was amplified in the gut microbiomes of 2015 Boston Marathon runners after the race. The same strain, when given to mice, enhanced the animals’ running performance on a treadmill by 13 percent.

Church, Scheiman, and Kostic are three of New York-based Fitbiomics’s co-founders with Scheiman also being the company’s CEO. Kostic also is Assistant Professor of Microbiology at HMS and an investigator at Joslin Diabetes Center in Boston.

“In our identification of V. atypica as a performance-enhancing bacterium, we performed a controlled longitudinal study in elite marathon runners, monitoring the composition of their microbiomes before and after the race by fingerprinting commensal bacteria with next-generation sequencing technology,” said Scheiman. His team now is translating the use of the bacterium into highly validated human probiotic strategies, and will apply similar ’omics approaches to dive deeper into potential microbiome changes in elite athletes of disciplines that rely on other physical abilities, such as strength and speed. “Ultimately, FitBiomics aims to mine the biology of the most fit and healthy people in the world, then translate that information into consumer products to promote health and wellness to the masses,” said Scheiman.

A key finding of the team’s foundational study that identified Veillonella atypica was the bacterium’s ability to respond to the increased lactate levels produced during long-distance running. After sensing lactate, the Veillonella bacterial population expands in the intestinal lumen and synthesizes a metabolite known as propionate, a short-chain fatty acid that enters the blood circulation, is transported to various tissues, and exhibits performance-enhancing effects that remain to be further defined on the molecular and cellular level.

The vast majority of human microbiome research concerns the composition of microbes in classic infections or more challenging diseases associations, such as type 2 diabetes, inflammatory bowel disease, and premature birth recently uncovered by the Human Microbiome Project. “We took a complementary and opposite approach in aiming to identify bacterial species that actively enhance specific physiologies, and that in the longer term could help build a powerful collection of probiotic and nutritional strategies that may not only improve athletic performances but also general health, resilience, and longevity,” said Church.

Supported by the Wyss Institute’s translation engine, the team developed their more broadly applicable integrated “Sports Genomics” approach, which as a first step utilizes next-generation sequencing to pinpoint changes in the microbiomes of elite athletes in longitudinal studies to identify performance-enhancing species. This metagenomic analysis is then followed up by other deep ’omics approaches, including investigation of the gene expression repertoires of identified bacterial species around athletic peak performances, and their output of metabolic substances that in turn might enhance host metabolism. FitBiomics plans to use this approach as a springboard to enable the creation of other health-improving probiotics.

“This is a fundamentally new concept for development of wellness therapeutics based on probiotic therapies that started out as a risky project at the Wyss Institute, and was subsequently validated experimentally. It is great to see it now entering the commercial world,” said Wyss Institute Founding Director Donald Ingber, M.D., Ph.D., who is also the Judah Folkman Professor of Vascular Biology at HMS, the Vascular Biology Program at Boston Children’s Hospital, and Professor of Bioengineering at Harvard’s John A. Paulson School of Engineering and Applied Sciences (SEAS).

Innovations in nanoelectronic tissue scaffolds, inhibition of PD-1 for treatment of cancer and infection, production of pancreatic cells, compartmentalized screening methods, and more