Another Boston-area robotics company has raised venture capital. But this one isn’t saying much about what it’s building yet.

RightHand Robotics, a Harvard University spinout based at the Harvard Innovation Lab, has raised $3.3 million, according to a regulatory filing. Co-founder Yaro Tenzer confirmed the amount but declined to say who the company’s investors are, except that they are “tier one” and “big name” venture capitalists and angel investors.

RightHand says it is developing “intelligent robotic order-picking systems.” That means robots that can operate in an e-commerce warehouse, for example, and fulfill orders by picking up items and putting them in boxes. Tenzer had no comment on whether the company has pilot tests or customers yet.

In addition to Tenzer, the startup is led by co-founders Leif Jentoft, Lael Odhner, and Robert Howe, a Harvard professor in bio-robotics.

As of last spring, RightHand had developed a three-fingered dexterous gripper that could pick up such items as tools, produce, and dry goods.

There has been a lot of investor and customer interest in dexterous robots that can handle goods efficiently without breaking them—it’s one of the frontiers of artificial intelligence and automation. Companies such as Rethink Robotics, Amazon Robotics (formerly Kiva Systems), Fetch Robotics, Empire Robotics, and Harvest Automation operate in the increasingly crowded sector. 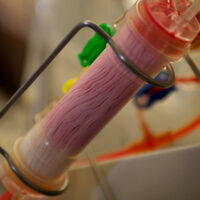