Based on innovations from Harvard University and Boston Children's Hospital, Nocion Therapeutics aims to selectively silence pain and itch neurons 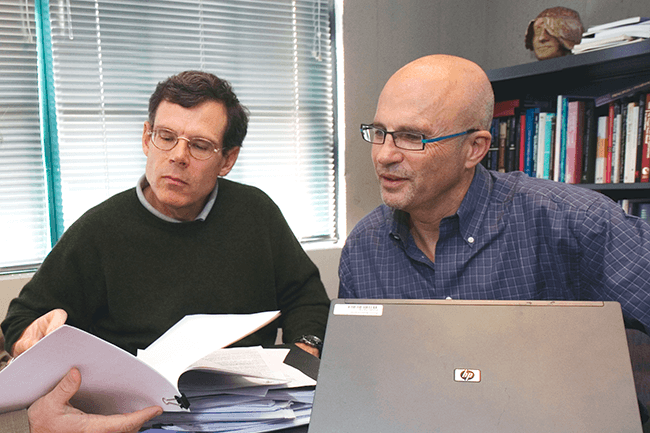 Through many years' research, Profs. Bruce Bean and Clifford Woolf developed a class of small molecules that can selectively quench the activation of sensory neurons, such as those causing itch or cough. (File photo by Jon Chase/Harvard Staff Photographer.)

Nocion Therapeutics has announced plans to develop novel pharmaceuticals that may provide targeted, robust and sustained relief for the treatment of serious medical conditions including cough, itch, pain and inflammation. The company is based initially on innovations developed through academic research led by Bruce Bean, who is the Robert Winthrop Professor of Neurobiology at Harvard Medical School (HMS), and Clifford Woolf, a Professor of Neurobiology and of Neurology and Director of the F.M. Kirby Neurobiology Center and Neurobiology Program at Boston Children’s Hospital and HMS. Profs. Bean and Woolf are co-founders of Nocion.

Through their research, Bean and Woolf jointly identified a novel class of sodium channel inhibitors that inhibits signaling in activated pain or itch neurons but spares all other neurons. With support from Harvard’s Blavatnik Biomedical Accelerator and Boston Children’s Hospital’s Technology Development Fund, the collaborating labs demonstrated that this approach can selectively inhibit active sensory neurons that are responding to external insult.

Working with Harvard Office of Technology Development, Nocion was founded on an exclusive license to foundational intellectual property from Harvard University and Boston Children’s Hospital to develop therapeutics. The company has raised $27 million in Series A funding.

Read more in the press release